The Wrangler feels 20 years out of date. 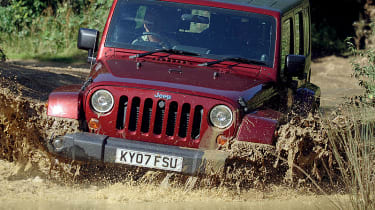 Driving The Wrangler looks very much the ‘traditional’ 4x4 – and feels as much as you clamour up into the cabin. Sadly, this means it’s not up to the standards of more modern competitors. It’s available with a diesel engine and automatic now, for the first time, but neither is what you would call cutting-edge. The wheezing 2.8-litre struggles to shift the Wrangler’s 1,980kg kerbweight, and the five-speed auto is hopelessly sluggish (though the manual is OK). The brakes are poor, and although torsional rigidity is claimed to have improved by 50 per cent, on the road it feels agricultural. It wanders, jitters, shakes, has an appallingly wide turning circle and frighteningly vague steering. However, off-road, it’s superb. It’s brilliantly suited to life in the rough. It’s just a shame that this comes at the expense of on-road manners.

Marketplace The Jeep is the odd one out in today’s compact 4x4 world. It’s not trying to be a direct rival to more mainstream competitors… and you can’t deny it looks fun. OK, it’s far from being sleek and sophisticated, but with its all-American image, it has a real Wild West vibe. There are two versions, standard three-door and long-wheelbase five-door Unlimited. Jeep does offer a petrol V6, but it’s the 2.8-litre diesel that will sell in greatest numbers, with the maker offering a choice of two trims – Sport or Sahara. It’s the latter that has the most luxuries, such as air con and plusher trim, though both versions include twin airbags.

Owning The best thing that can be said about the cabin is that the rear seats fold flat quite neatly – resulting, in the Unlimited, in a decent 1,600-litre load area. But with doors that don’t stay open by themselves, cheap trim, minimal stowage, inadequate night time illumination, a dreadful layout and countless ergonomic flaws, the Wrangler is woefully under developed. It’s uncomfortable to sit in, tricky to see out of, slabby and dated. Even the seats are unsupportive. As for running costs, they’re steep as well. We returned a pitiful 23.3mpg from our auto diesel test car, while a retained value of 36.6 per cent is one of the worst in the 4x4 sector. And while entry-level list prices seem low, they soon bump up when you realise only the Sahara comes with air con.