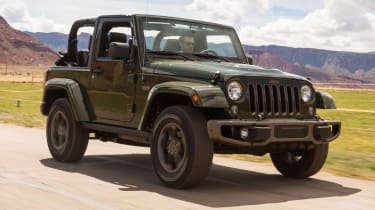 The Jeep name is an American icon and its history is gilt-edged. From the very first Willys Jeep to the latest Renegade crossover, the rugged 4x4s have come a long way in 75 years. But not the Wrangler. Jeep’s Land Rover Defender rival is stuck in the past and is charmingly old-fashioned in the way it does business. This 75th Anniversary model adds a little gloss to the package, but doesn’t do much to improve the otherwise dated recipe.

American brand Jeep celebrates its 75th birthday this year, and to mark the occasion it's rolled out Anniversary special versions of several of its cars - the Renegade, Cherokee, Grand Cherokee and Wrangler. We’ve been behind the wheel of the Wrangler – a model generally considered the most classic of all.

The rough and tough 4x4 isn’t a common sight on UK roads, and this new special 75th Anniversary edition will be rarer still, with fewer than 100 due for import this year. But for those who love all things Jeep, the car pulls on the heartstrings. 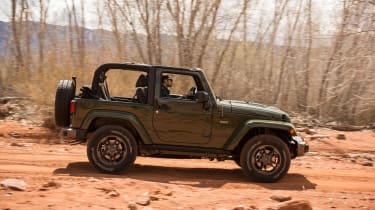 It’s based on the Wrangler Sahara, and gets loads of kit including climate control, cruise control, auto lights and hill descent control as standard. For the birthday celebrations, the 75 comes in six colours, including Sarge Green, plus there are new 18-inch bronze wheels and a body-coloured grille.

Inside, leather seats with ‘75th Anniversary’ branding feature, as do sat-nav and an upgraded premium sound system. Limited-slip differentials and orange exterior badging are also included. 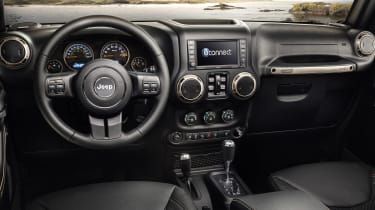 Just like the rest of the Wrangler range, the 75 is powered by Jeep’s 2.8-litre diesel. It’s a little rough at idle, but it’s smooth enough on the move – and with 200bhp from 2,000rpm, it’s swift under hard acceleration. Jeep hasn’t confirmed gearbox options, but our car had a five-speed auto, which changed ratios cleanly.

As with the Defender, which is no longer in production, the Wrangler can’t be compared with similarly priced SUVs like the Ford Kuga or Mazda CX-5 when it comes to handling. The steering is totally devoid of feedback, and the body sways through faster corners. While this sounds dramatic, the 75 isn’t bad to drive; it never feels cumbersome and you quickly learn to manage its flaws.

It also rides well; even our short-wheelbase version absorbed bumps rather than bouncing over them. With its switchable two and four-wheel-drive modes (and an old-fashioned lever on the centre console), the Wrangler will still put most other cars to shame on challenging off-road tracks.

But there’s no getting away from the fact the Wrangler drives like a traditional 4x4 from 20 years ago, and feels like one too. You sit in front of an upright, square dashboard looking out over a long bonnet, next to wafer thin doors. It returns a claimed 34.9mpg and coughs out an alarming 213g/km. However you could say it’s pleasingly retro and, just like the Defender it’s charming. It’s all the better for feeling old.

Jeep hasn’t totted up the final list price for the 75th Anniversary cars yet, but it would be safe to assume a price rise of around £2,000 above the standard Wrangler Sahara and around the same figure for the other anniversary Jeep models. That would mean the Wrangler 75 comes in at £32,000, and of that some of money there’s a vast number of more practical and better to drive SUVs for that money like the Kuga, CX-5 and the BMW X1. But with the death of the Defender, the Wrangler is in a class of its own – defiantly stuck in a different world that majors on off-road prowess and heritage rather than curvy bodywork and a fun handling chassis. In this regard, it’s difficult to criticise the Wrangler.

Is the 75th good value for money? Well, on the cars like the Renegade the birthday celebrations look a little chintzy but it works on the Wrangler. Buy one of the few that’s arriving here on these shores and you’ll have a collector’s item in years to come.