Kia will aim to steal the Toyota Prius's thunder in 2016 with a petrol-electric crossover, and we've seen the design 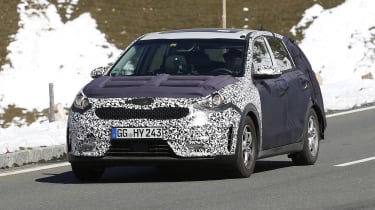 With the new Toyota Prius just revealed and many manufacturers jumping on the hybrid bandwagon, Kia is readying a new petrol-electric crossover for launch in the middle of 2016.

These spyshots are the first we've seen of the as-yet-unnamed Korean hybrid, but back in November last year Auto Express went to visit Kia's Namyang design centre in Seoul where full scale models were. These renderings show what we expect the finish product to look like.

No photography was allowed inside the top-secret studio, but we can reveal that there are elements of the design borrows cues from the recently revealed Sportage. With an SUV-shaped profile, plastic cladding around the wheel arches and bumpers, but a relatively low ride height it’s appearance is very much a blend of a small estate and a SUV – much like the Mercedes GLA – and designed to have global appeal. But it also exists specifically to eat into the Toyota Prius’ 400,000 annual sales.

The interior is based around a new design theme that will debut first on the all-new Optima in late 2015. Featuring a large central screen recessed into the dash and rows of switchgear arranged in long horizontal lines there’s a hint of BMW influence in the layout. To set the hybrid apart white and blue plastic inserts in the dash, gear lever surround and door frames give it a youthful, hi-tech feel. 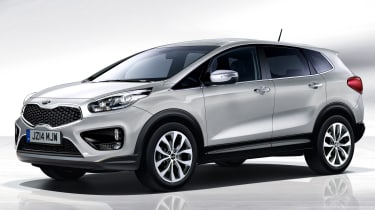 Measuring 4,350mm long it’s larger than the Soul, but smaller than the Sportage and according to Kia’s head of overseas marketing Spencer Cho, hits a sweet spot in terms of size and design: “Our research showed that Prius owners want a hybrid but aren’t happy with the design, this is the answer to that,” he said. “In the UK the customers we’ve shown have already given us excellent feedback on the styling.”

There are no detailed specifications on the powertrain yet, but Cho confirmed that it sits on an all-new platform and will combine a 1.6-litre petrol engine with an electric motor for impressive fuel economy. “The Prius currently does around 57mpg US (68mpg UK), with the next model probably increasing to around 60mpg US (72mpg UK),” Cho said. “We are aiming for over 50mpg US (60mpg UK).”

That might not sound like much, but Kia’s research shows that customers are happy to sacrifice a little fuel economy for a more fashionable shape. But why not offer it with petrol and diesel engines, too, especially in Europe where diesel is king? “Even if this model isn’t exactly what a customer wants, it still draws them to the showroom,” Cho explained. “Once they are there we have plenty of alternatives, such as the Soul diesel and Soul EV. We want to avoid any cannibalisation from the rest of the range.” 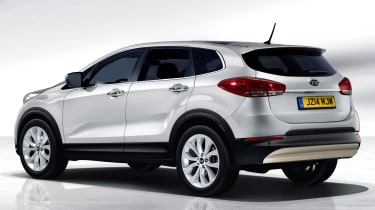 With the market for small SUVs booming, Kia is also working on a conventional rival for the Nissan Juke, more closely-aligned with the Niro concept, set to arrive after the hybrid has launched in 2016. “The hybrid features some ideas from the Niro concept, but this is our dedicated hybrid model,” Cho said. “We are also considering a Niro-type model for the future. The Niro market segment is still very valid and interesting.”

And with an all-new hybrid platform at its disposal, Kia is eyeing up a series of derivatives using the same underpinnings as the small SUV, according to Cho: “This platform will have an important role for the future. We will investigate lots of ideas to make derivatives in the future, but this is the only body style for now.”

Would you be tempted by a new hybrid SUV from Kia? Let us know in the comments below...