Acclaimed hatch has gone under knife in a bid to close gap on newer rivals. have the changes been a success? 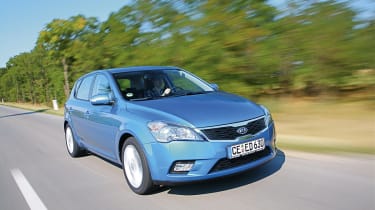 The Kia hatchback has been improved in virtually every way. It’s now better looking, more refined and cheaper to run. Plus, the new 1.6-litre diesel engine is a cracker. The steering still feels artificial, but overall this is a dynamic package to be proud of. The Cee’d is well worth a look as an alternative to mainstream five-doors.

It only feels like it was launched yesterday, but the Kia Cee’d has been given a mid-life facelift.

The results are impressive, with a fresh look and a raft of improvements for a car that first hit UK dealers in 2006.

For now, the five-door hatch and estate versions alone have been tweaked, with an upgraded three-door Pro_cee’d to follow in 2010.

A striking new grille and reshaped headlamps give the illusion of a lower, wider stance. At the rear, a refreshed tail-light cluster mimics the appearance of more expensive LEDs. Completing the look are revamped alloy wheels, as well as a choice of five new colours.

Inside, the basic cabin is unchanged, but the central stack of the dashboard has been restyled. It’s now easier on the eye and more intuitive.

Better materials are used for the air vent surrounds and door trim, too, with high-gloss black included for the first time in a Kia. It’s subtle, but altogether more appealing.

The company has bent over backwards to refine the experience from behind the wheel. Kia’s engineers have tweaked the suspension and chassis for a more comfortable ride, sharpening the steering and adding soundproofing inside the bodyshell. The result is that the Cee’d is a far quieter and more comfortable car.

The ride is impressively well damped, and takes the sting out of rough road surfaces, yet at the same time, the suspension is firm enough to resist body roll.

Buyers will still be able to choose from three petrol engines and two diesels, although the popular 1.6-litre CRDi oil-burner has been replaced by an all-new unit of the same capacity.

This promises greater torque from low in the rev range, while also giving improved fuel economy and emissions.

Elsewhere, the addition of low-resistance tyres across the range reduces average CO2 emissions.

The 89bhp 1.6-litre diesel is as impressive on the road as the figures suggest, with its 255Nm of torque making for effortless progress.

So overall, it’s a solid update for Kia’s hatch.

A sharper look blends with a stronger package to ensure the Korean five-door is now even better equipped to take on the best in its class.