The Kia Niro Hybrid has been treated to a mid-life refresh, but have the updates made it better than ever? 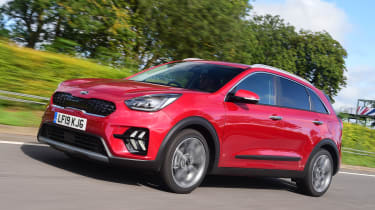 The Kia Niro Hybrid has been treated to an early mid-life refresh and it’s all the better for it. Its technology and connectivity offerings are among the best in this class, and the hybrid drivetrain remains quiet and efficient around town. It’s still an entirely safe and predictable car to drive, and that’ll suit most of its potential buyers down to the ground.

The Koreans, for whatever reason, don’t conform to the car industry’s standardised four-year product cycles. So, just three years after it launched, we find ourselves sat in the driver’s seat of a refreshed Kia Niro.

Revealed at the Geneva Motor Show in the spring, the Hybrid and Plug-in models get all the usual mid-life updates – including a fresh face, tweaked bumpers, and new wheel designs. There’s some new trim inside, as well as improved interior tech options, too.

While it’d be a stretch to suggest this car is instantly recognisable as the facelifted car, the styling is certainly sharper than before. The new LED daytime running lights give the Niro a better defined signature, while the updated rear light clusters offer a subtle improvement on the old car’s plainer design. Its SUV body continues to give it the edge over the polarising Toyota Prius, too. 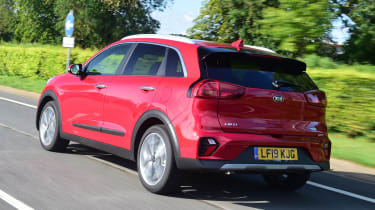 It’s inside where prospective buyers will notice the biggest differences, however. The entry-level ‘2’ model gets a run-of-the-mill eight-inch display, but ‘3’ cars and above boast a slick new 10.25-inch touchscreen, which sits neatly in the middle of the dash. With our car’s new seven-inch digital instrument cluster, it’s the kind of set-up you’d expect in a top-spec BMW, rather than a sub-£30k Kia crossover.

It all works really well; the central screen is clear and responsive to the touch, and with standard-fit Android and Apple connectivity it’s easy to use your smartphone’s functions on the move. The whole set-up feels beautifully integrated, though it’s a shame you can’t get the map to display within the dials – as you might in an Audi or even a Volkswagen.

Overall, interior quality feels solid, with only a few cheap and scratchy plastics within easy reach. The kit list for our flagship 4-spec test car includes everything from heated and ventilated leather seats, to wireless phone charging and an eight-speaker JBL stereo. The things you touch most often are nicely screwed together, and visibility is decent – helped by the standard-fit reversing camera. 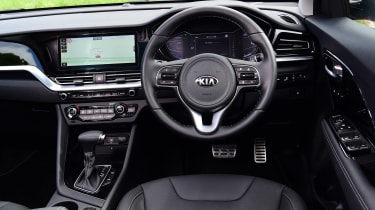 Also new on this revised Niro is Kia’s UVO Connect Services. Mimicking many premium manufacturers’ take on ‘live’ connected services, the Niro can now provide real-time information on things like the traffic and weather. There’s a downloadable smartphone app, too, allowing owners to check things like trip info – and remotely send destination information to their car’s sat-nav.

The three powertrain choices (hybrid, plug-in and electric) remain – though due to the fact the EV only went on sale late last year, only the HEV and PHEV models have been tweaked for now.

It’s the standard Hybrid we’re driving here – though Kia has left everything under the skin well alone. That means it carries over the previous car’s 1.6-litre petrol engine and electric motor, which together produce 139bhp and 265Nm of torque. The car starts in its Eco setting by default; this works wonders for fuel economy, but hampers performance somewhat.

This is not a fast car, yet take things easy and it’ll sooth and relax its way up to the national speed limit without fuss. Around town it’s hushed, running for short distances on electric power alone. When the engine does kick in, it’s more intrusive than the set-up in the latest Toyota Prius – and we prefer that car’s CVT gearbox, too.

Few buyers will ever care to hustle the Niro down a bendy back road, but those who do will find it handles neatly and predictably. Again, the Toyota’s chassis has the edge in this department, but the steering is direct and the brakes progressive – there’s none of the violent ‘regen’ found in the Hybrid model’s e-Niro electric stablemate.

But arguably the biggest reason you buy a hybrid is for their low emissions and rock-bottom running costs – and while the Niro is among the cleanest SUVs on sale, it can’t come close to the penny-pinching Prius. Even the flashiest Toyota emits just 82g/km of CO2 – placing it one Benefit in Kind tax band lower than the Kia in top-spec trim.