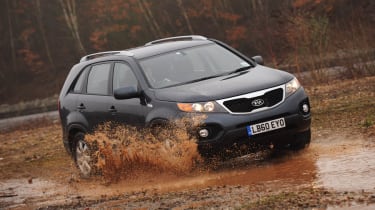 Even in its most basic form, the Sorento is still an incredibly appealing proposition. It features all the equipment you’ll need, and provides a great all-round driving experience, too. But it looks likely to be hamstrung by its price, with the options of a more practical interior and a larger engine carrying a relatively small premium.

Advertisement - Article continues below
The revised Kia Sorento has won many plaudits since it traded some of its mud-plugging  ability for improved luxury and refinement – but how does the line-up’s cheapest model fare?
The Sorento 1 is the only car to get a 2.0-litre diesel engine and five seats – rather than  the usual 2.2-litre powerplant and seven-seat layout found elsewhere in the range.
Video: watch CarBuyer's video review of the Kia Sorento
On the road, the oil-burner  provides plenty of go. It propels the Kia from 0-60mph in 10.5 seconds – that’s 1.3 seconds down on the 2.2, although the gap doesn’t feel noticeable.
The two-wheel-drive set-up won’t be a problem for most drivers, either. We drove on wet and greasy roads, and the front tyres occasionally scrabbled for grip under hard acceleration, but otherwise it’s difficult  to distinguish this car from four-wheel-drive versions. Owners may see a difference  at the pumps, though, as this model is the most frugal in the line-up. It returns 44.1mpg  and emits only 169g/km.
Refinement is impressive, too, with only a little vibration through the controls at low revs. Through tight corners,  the Sorento shows it size,  with a hint of body roll, but  it always feels sure-footed.
As you’d expect for an entry-level model, there isn’t a huge amount of equipment, but all the essentials feature, such  as alloys, USB and air-con.
Without seven seats, there’s a large 531-litre boot, with a false floor for storing valuable items out of sight. Fold the  rear seats, and the luggage capacity rises to 1,546 litres.
You’d expect this Sorento’s biggest draw to be its price –  in this specification, it costs £22,990. Trouble is, buyers  can get the more powerful  diesel and seven seats for  a mere £765 more. So this model may become a niche choice in the Kia range.
Advertisement
Share this on TwitterShare this on FacebookEmail
Advertisement