We get to grips with the new Kia Sorento for the first time in European spec, on European roads. 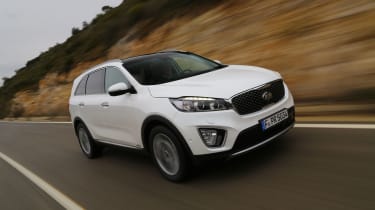 The Kia Sorento is closer to its premium rivals than it has ever been. The styling is smart, the interior better than any Kia previously and the gearbox/engine combination is strong. The improved practicality also makes it more appealing than ever to growing families and, of course, there’s the ever-present seven-year warranty for that added feeling of security.

In the past, it often felt like the Kia Sorento’s priorities were more about practicality and value than anything else. But with this new model, Kia has attempted to give style, quality and refinement an equal billing.

It certainly seems to have worked on the exterior. The smart new design means that the Sorento, despite its large size, doesn’t look bulky or awkward at all – helped by the updated grille and rear spoiler.

Inside the car, things look smarter still. However, poke around a bit and the materials don’t feel quite as robust and well-finished as they do on first appearance. There is some scratchy-looking plastic around the gearstick of lower-spec cars and the button deletion is far from smooth in the cabin. 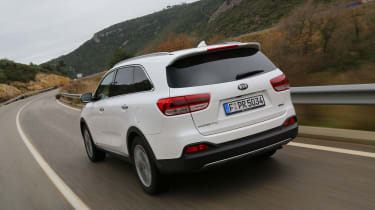 Things might change by the time the Sorento goes on sale in the UK though. Our test car was only a rough approximation of what UK buyers might get in a KX-2 mid-range model with some bits missing but it was still a pleasant place to be and shows the brand’s continued move forward.

What is impressive, however, is the refinement of the new model. From inside the car, the 2.2-litre diesel is barely audible and it was only at higher revs where the engine noise became intrusive at all. That refinement doesn’t extend to the wind noise, which isn’t helped by the rather large door mirrors.

The Sorento’s updated 2.2-litre diesel engine with the six-speed manual gearbox will go from 0-62mph in nine seconds, around half a second quicker than the automatic model. The gearbox is satisfyingly smooth and the engine, with its 441Nm of torque, offers more than enough power. The body is well controlled around corners for a car of the Sorento’s size and weight. 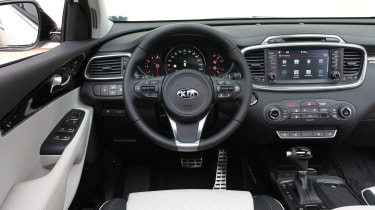 Opting for the manual gearbox over the automatic option also helps bring down running costs as emissions drop from 174g/km in the auto to 149g/km in the manual entry-level cars on 17-inch wheels. Economy falls to 49.5mpg from the thirstier auto figure of 42.8mpg. Our car, on bigger 18-inch wheels, is likely to be slightly less economical that those entry figures.

One thing that is clear from first sitting in the Sorento is just how big it feels. You can get over this to an extent by opting for a higher spec model as you’ll get the new 360 degree view camera, which should make maneuvering the large SUV that little bit easier. The parking sensors on our car helped, too.

The light steering also helps when moving the Sorento in tight spots. Although the lack of weight in the helm isn’t quite as useful at higher speeds where the wheel never feels as if it has quite weighted up enough. Flick the car in to sport mode, which reduces the amount of steering assistance, and things do improve. 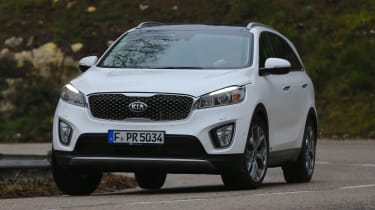 It’s not just the looks and refinement that have been improved on this latest Kia Sorento. The manufacturer has also upped the practicality stakes, with bootspace growing from 515 litres on the outgoing car to 605 litres with the third row of seats folded. The second row of seating folds completely flat making it easier to slide longer objects in. But that’s not all, Kia has added an under floor storage compartment in the boot floor too.

Space in the back for passengers is also impressive, with enough headroom and legroom for the tallest of occupants. The third row also has plenty of space for kids, though the elevated floor means adults will feel as if their knees are around their ears. Generally though, the Sorento is a great fit for family life.