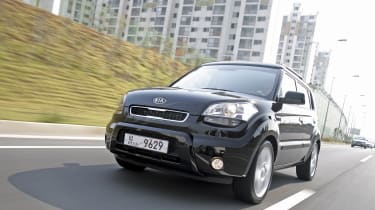 With its Cee’d family hatch, Kia raised its status from a cheap-and-cheerful brand to mainstream contender. The Soul should take the firm even further, as it has that quality which never fails to sell cars: character. By appealing to the young with its quirky style and the mature with its practicality, the Soul could fly out of Kia’s showrooms. The only letdown is the quality of materials in the cabin.

We’ve finally discovered Kia’s Soul! In May, we drove the Soul Burner – one of three themed concept cars. But now, we’ve got behind the wheel of the real deal, ready to hit showrooms in March.

Described by the maker as an ‘urban crossover’, the car has elements of an SUV, MPV and traditional hatchback. The exterior is striking, as it shares many of the concepts’ styling details. Touches such as the letterbox grille, smoked front lamps and flared wheelarches add a hint of aggression.

Inside, the high-set controls on the steeply raked dashboard are simple and well laid out. There’s a USB port to connect an MP3 player or memory stick, plus storage compartments lined in a contrasting colour. But while the cabin looks good – especially in bright colours – in places, some of the plastics aren’t of the highest quality.

Still, the Soul really impresses by seating four adults comfortably within its supermini frame. There’s masses of head and legroom, too. The trade-off is a small boot, and it’s a pity there isn’t a sliding rear bench.

The lofty driving position offers a great view, although there’s no steering reach adjustment. We drove 1.6-litre petrol and diesel versions. The latter is our pick – it’s punchy from as low as 1,500rpm, making it flexible and well suited to town driving. While the electric power-steering is light and short on feel, turn-in is sharp, making the Soul easily manoeuvrable along urban roads. The ride is spot-on, and only the imprecise gearbox lets things down.

From launch, Kia will offer the newcomer in three trims, starting at less than £11,000. The flagship will have 18-inch alloys, an eight-speaker stereo and brightly coloured interior trim. There will be plenty of scope for personalisation, too, including bold graphics kits and a parking camera with its display integrated into the rear view mirror.