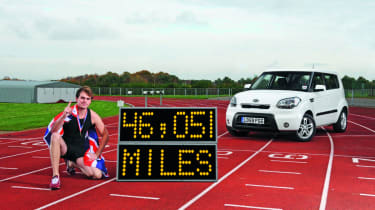 Our long-term Kia Soul is a record breaker! The eye-catching supermini has had an impressive spell at Auto Express, and while it won’t win any sprint races, it has triumphed in our very own marathon – by racking up 43,724 miles. That’s more than any car on our fleet and, as it entered the home straight, it was still performing as well as it did on the day it arrived.

As with our Nissan Cube (Page 64), people love or hate the Soul. But in my experience, most naysayers are more offended by the badge than by the car itself. And I just don’t understand it. Kia is clearly going places – look at the Venga and Sportage – so snobs put off by its less familiar origins are missing a trick. In fact, they’re missing quite a few, because the Soul is a multi-talented machine. It’s the size of a supermini but provides the kind of interior space normally associated with small people carriers.

And it looks more like an off-roader than a hatch. It can even double as a caravan... I know this after being forced to sleep in ours following a friend’s wedding. I had planned to camp out after the celebrations but, in my haste, forgot to pack a tent! So while my mates slept peacefully under canvas, I simply reclined the front passenger seat and enjoyed a surprisingly comfortable night’s kip!

Thankfully, I remembered to take my tent on a camping trip to Belgium last summer, when the Soul covered itself in more glory. Its punchy 1.6-litre CRDi diesel made easy work of the long motorway journey and the upright seating position means driving on congested roads is less stressful than normal.

Four adults comfortably fitted inside, and the spacious 340-litre boot swallowed all our camping gear for the trip. Better still, the built-in iPod connection meant we could take it in turns to play DJ from the passenger seat. My astronomical mileage has ensured I’m on first-name terms with the staff at Westover Kia in Ferndown, Dorset – as a result of the 12,500-mile service intervals.

The sole problem I experienced in 12 months with the Soul was a chipped windscreen. The car itself has been faultless, which is no mean feat considering how far it has had to travel. Garage staff even called to remind me when it was due for attention. They simply looked at my average mileage on my first visit and calculated when I’d be due another check-up.

That suited me down to the ground, as I always leave things like this to the last minute – and a phone call is much more personal than a standard letter through the post. The Soul was always returned fully valeted and service charges were low, too (see spec sheet, left), so the overall dealer experience has been as good as the car has been to drive.

Yes, the tall body means there’s some roll when it corners, but I always enjoyed driving the Kia on twisty roads. From its accurate steering and snappy gearshift to its punchy engine, which feels bigger than the raw capacity suggests, it made even the longest journey a breeze. And as any marathon runner will tell you, that’s a priceless quality.