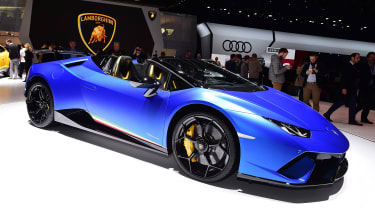 The Lamborghini Huracan Performante Spyder has been revealed at the 2018 Geneva Motor Show. It follows in the wheel tracks of the coupe, which was unveiled 12 months earlier at Geneva 2017. The open-top model uses the same naturally aspirated 631bhp 5.2-litre V10 as the hard top, although 0-62mph comes up in 3.1 seconds, which is two-tenths slower than the coupe. Top speed is 201mph. It’ll sprint from 0-124mph in 9.3 seconds (four tenths slower), while its top speed is 201mph.

As you’d expect, the Performante Spyder takes much of its styling inspiration from the Coupe. That means the same aggressive bodywork and sharp creases, as well as identical green, white and red stripes along the sills, and a high-level rear wing. Like the hard-top, the Spyder gets the same repositioned exhausts and forged carbon trim, as well as identical 20-inch multi-spoke alloy wheels, ceramic brakes and Pirelli P Zero Corsa tyres. 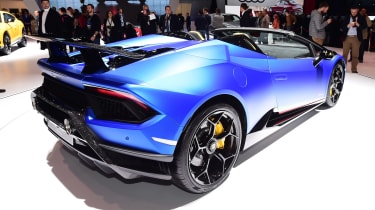 The interior is lifted wholesale, too, with the same carbon details, digital dials and fighter jet-style starter button. There’s Alcantara as far as the eye can see, while the identical Y-shape details on the seats are carried over unchanged. The ‘high quality soft top’ is the same as the one found on the standard Huracan Spyder.

Last year, the Lamborghini Huracan Performante Coupe took the production vehicle Nurburgring lap record before being ousted by the NextEV NIO EP9. With a laptime of 6:52.01s, the Huracan Performante had knocked the Porsche 918 Spyder off the top step of the ‘Green Hell’ leaderboard, beating the Porsche hybrid hypercar by just under five seconds.

What do you make of the Lamborghini Huracan Performante Spyder? Would you take the coupe instead? Let us know in the comments...