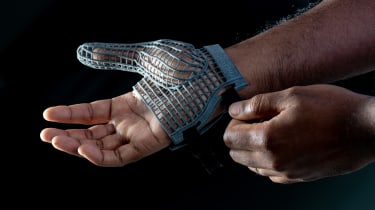 Jaguar Land Rover is developing a 3D-printed latticework glove that aims to protect production-line staff from the musculoskeletal disorders that can affect up to 40 per cent of workers in some industries.

The glove, while a prototype for now, is designed to be comfortable enough to be worn for the entirety of an eight-hour shift, giving workers’ hands the protection and support they need when carrying out tasks such as attaching clips and fasteners or mounting door casings.

JLR has used both computer-aided design and 3D printing to make the glove, which is now entering the second-generation prototype phase. Featuring a foam pad made out of an impact-absorbing polyurethane known as D30, the glove fits over the base, back and thumb of the hand, supporting it as workers carry out complex, dexterously demanding tasks that are repeated several times over the course of a shift.

Part of JLR’s “Destination Zero” project, which aims to promote safe, clean and healthy environments, the firm has developed and created the prototype glove entirely in-house, with staff trialling the gloves as they are developed.

The desire to reduce workplace injuries is clearly well-intentioned, but it also comes with a sound business case: a third of all money paid out in compensation cases comes as a result of musculoskeletal conditions.

Chris Noble, JLR’s additive manufacturing strategic engineer, said: “Technologies like the 3D-printed glove allow us to use the world-leading expertise and equipment we have in-house to protect the hands of our makers, developing equipment that will make Jaguar Land Rover a great place to work, now and in the future.”

Do you think JLR is pioneering a safer working environment or is focussing in the wrong areas? Let us know in the comments below...