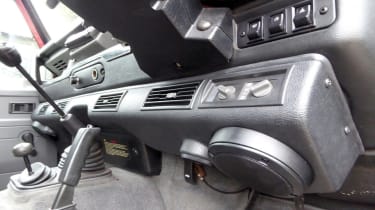 We recently featured the CoolAir Logan air conditioning system being fitted to our Td5 Defender 110 station wagon. This is a unique system because it features a separate unit for the rear passengers, housed in a bespoke centre console. The front system is similar to the standard Land Rover unit. After five months of testing, it’s time to pass on my own, and others’, opinions of the system

The air conditioning system takes up minimal under-bonnet space, using similar components to those of the standard factory installation. The exception is Coolair Logan’s slim-line condenser matrix mounted in its own frame ahead of the engine radiator. Its narrow section eliminates the need for the forward-extending front panel seen on Defenders with factory-fitted systems.

Some motoring publications complain of reduced knee room caused by the full width air conditioning console across the bulkhead of factory-fitted vehicles. But, at 5 feet 11 inches tall, I haven’t even noticed the presence of the console when climbing in or out, or while driving. The only con of the console is that it restricts access to the screen wiper motor. The centre console, housing the separate rear air conditioning unit, sits between the front seats, replacing the middle seat or the traditional cubby box. It has far less storage space than the cubby box. On the other hand, the new unit incorporates two adjustable arm rests with opening lids sufficiently sized to store sunglasses, cash, compass or phone. The forward section provides twin cup holders and a cross-slot which allows handy storage of OS maps. Partly opened maps slide underneath the arm rests, where they stay secure over rough terrain, and are immediately to hand.

Do we need this?

Air conditioning is now a basic requisite in ordinary cars, but has always been debatable for a Defender, especially in the UK. But, after using it for five months I’d hate to be without it, and here’s why. De-misting: The system removes moisture from the incoming air, so the resulting dry air absorbs condensation on the inside of the screen and windows, enhancing the effects of the standard demisting system. Motorway speeds: You don’t need the windows down to keep cool on hot days, so high-speed driving is quiet (for a Defender). Drying out: When wet kids, walkers, mountain bikers and dogs come on board after bad weather, the air con system helps dry everything rapidly, especially with the rear system fitted. And the cab doesn’t have to be cold – the heater can be run simultaneously to maintain the desired temperature. So it’s useful in the UK winter. Hot weather: Cool is comfortable. Air con also reduces drowsiness. I found the front system adequately cools the cavernous 110, but with eleven people on board in hot weather, the rear system was a boon for the guys on the rear bench seats. A handy USB port is fitted in the rear of the centre console, but there isn’t one in reach of the front seat occupants. 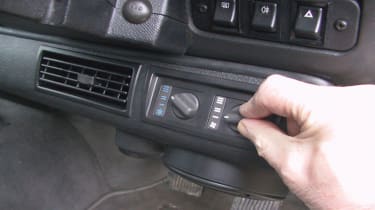 Operation is simple and manual, devoid of climate control complications. 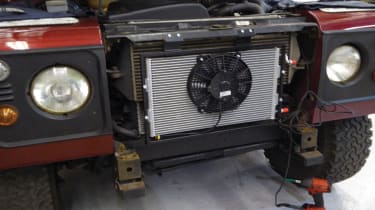 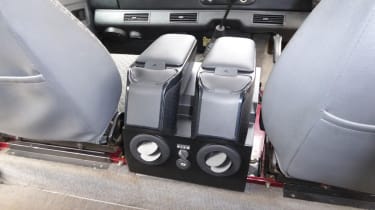 The rear passengers’ view of the centre console housing the rear aircon unit.

The air conditioning master control is at the driver’s end of the front console, along with the air flow switch. The master switch provides three levels of cooling, and an off position which also stops the blowers. The blower switch offers three airflow rates through four easily adjustable vents. Twin circular adjustable vents in the rear unit are positioned low down and close to the rear passengers’ legs, though they can be aimed steeply upward where the cool air is needed. Cooling here, is controlled from the driver’s switch, but the rear passengers have their own blower control.

After just five months we wouldn’t expect any reliability issues. Despite driving some harsh rocky off-road terrain, no rattles or squeaks have developed in the interior consoles.

Switch on, and the cool air arrives in seconds. The switch settings and vent arrangements make the temperature and airflow fully controllable.

The effect on fuel consumption has been minimal. Normal servicing costs are similar to any other aircon system.