Some like it rough. And if you are one of them, then the Land Rover Defender is hard to beat. Its boxy lines, separate ladder-frame chassis and utilitarian interior are closely related to those of the original 1948 Land Rover utility. 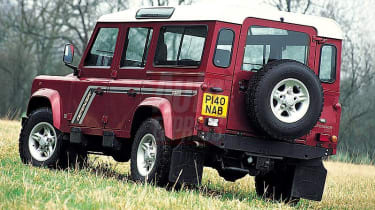 Some like it rough. And if you are one of them, then the Land Rover Defender is hard to beat. Its boxy lines, separate ladder-frame chassis and utilitarian interior are closely related to those of the original 1948 Land Rover utility. Fifty-five years on, the car is more advanced, but looks pretty much the same. The biggest change came in 1983, when the leaf springs were swapped for coils. A flatter nose, revised cabin, fresh gearboxes and new engines were introduced, too. The revised models, called 90 and 110 depending on wheelbase, had the same bodyshells as before - Station Wagons, vans and pick-ups. Using 2.5-litre normally aspirated and turbodiesel units, the LR continued as it was until 1990, when it was renamed Defender.Checklist * Early Td5s suffered from flywheel problems and electrical niggles. Earlier units are generally tough, but make sure that cambelts are changed properly on the 300Tdi. * Faulty gearboxes can be serious. Be wary of ratios that are hard to engage and ensure low ratio is easy to select. Changing boxes will cost £1,000 at a specialist. * Worn suspension bushes can affect handling. The ride should be firm, but not wallowy. Aftermarket polyurethane bushes give far more comfort and last longer. * Thick, black smoke from the rear of the Defender under acceleration usually means worn diesel injectors, requiring a top-end rebuild. Engines should do 200,000 miles if maintained properly. * The aluminium body resists corrosion, but the chassis is steel. Look for rot around the front and rear outriggers, the front bulkhead and the spring mounts.Driving impressions Don't expect any creature comforts - the Defender is a commercial vehicle by nature. The seats are OK, but the driving position is offset and there's not much elbow room. The ride is bouncy, too. Yet the Landie feels faster than its power suggests, while the high driving position, big gearlever and surprisingly good power-steering make it fun. Unless you need it for commercial purposes, a Defender is a vehicle you buy with your heart rather than your head.Glass's View Look at a Defender and you are feasting your eyes on a highly respected off-roader which has a wide range of applications. As a result, all variations are sought after, and values have remained high. It's a model that refuses to die, and it maintains a fiercely loyal following, so don't expect residuals to take a dip in the next few years. This Land Rover is a safe place to put your money if you're worried about depreciation, and Station Wagons are the most popular. Jeff Paterson, Snr Cars Editor, Glass's GuideLife With A Defender I love my 1994 L-reg Defender, but it has set me back more than £2,000 in repairs over the past two years. The cambelt snapped, and then I had to shell out for a new set of springs all round. David Lloyd, Old Warden, Beds Nothing beats my Land Rover off-road. It's like a Meccano set - if it breaks, take it apart and bolt it back together. It helps to be handy with spanners. Joe Collinge, Bradford, W Yorks

With the emphasis now on hi-tech design and refinement, some cars seem out of step. Land Rover's Defender is one of these, retaining its rugged appeal. With the door against your elbow and the handbrake almost under your clutch leg, the driving position is best described as cosy. It's hardly ideal for everyday motoring, but as emergency services and workforces will testify, the Defender has few peers. And with the new Td5 engine, the car is an even more flexible friend.