Punchy six-cylinder diesel Land Rover Discovery SUV arrives on British roads, but how does the TD6 compare to the four-cylinder SD4? 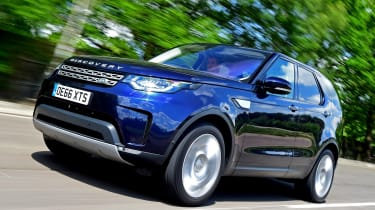 Whether or not you plump for the SD4 or the TD6 in the new Discovery is down to personal preference. We’d argue that outright pace is less important because of the relaxed driving experience, and the cheaper-to-run SD4 is capable enough for most needs. Even so, if you’re towing or regularly travelling with seven on board, the TD6 will be worth the extra.

We’ve only been able to test the new Land Rover Discovery on British soil with its downsized four-cylinder SD4 diesel engine so far – and we’ve been impressed. Now we’ve tried the TD6 version to see if it makes an even stronger case for itself.

If you only went by the Disco’s on-paper specifications, you’d be surprised by how small the performance deficit is between the SD4 and TD6. With 254bhp, the six-cylinder unit is only 18bhp more powerful than the four-pot, and there’s only two-tenths of a second between the pair from 0-62mph.

Given that (officially, at least) the TD6 is capable of around four miles to the gallon fewer than the SD4, that might look like a slightly unnecessary upgrade. And it’s an even tougher call for business users, because the TD6’s CO2 emissions of 189g/km put it in a slightly higher Benefit in Kind tax rating (36 per cent vs 37 per cent). 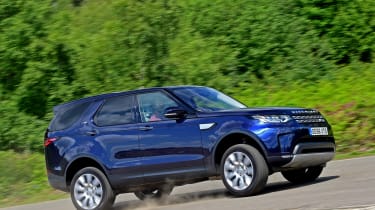 But there is one very important figure on the spec sheet that plays in the TD6’s favour: it has 100Nm more torque. While it barely feels quicker than the SD4 off the line, it counters with effortless in-gear acceleration and unruffled motorway cruising. It never gets genuinely rapid, but where the four-pot can feel a touch strained when fully loaded or overtaking, the smooth TD6 just gets on with the job, working perfectly with the eight-speed auto box.

The engine note is a touch less intrusive and more melodious, too, adding to the new Discovery’s upmarket feel. The TD6 might be less efficient on paper, but it’s still far less thirsty than the old Disco – mostly thanks to a weight reduction of up to 480kg. That’s a fair chunk even on a big SUV, although the SD4 is 125kg lighter again.

In reality you’ll struggle to notice any difference in handling between the two; both versions feel less cumbersome than the old Disco but neither is as agile or as sharp as an Audi Q7. 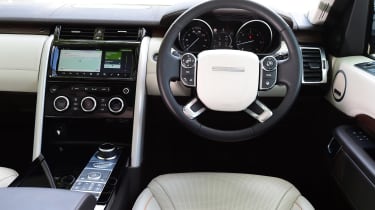 The trade-off of the soft suspension and lazy steering is that the Disco is a seriously accomplished cruiser, with much less wind, road and engine noise than in the previous model and a pleasingly supple ride.

The only other thing to bear in mind is the price. At £64,495, our HSE Luxury test car commands a £1,300 premium over the equivalent SD4. That’s not a huge difference, but we’d still be tempted to stick with the SD4 and spend the cash we saved on something from the lengthy options list.