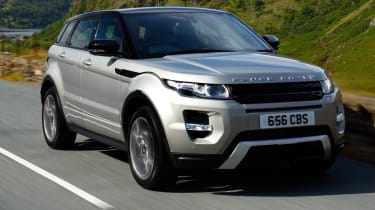 The Evoque needed to be good enough to justify all the attention – and it certainly is. While it’s not exactly a cheap choice, especially if you go for the more expensive Prestige or Dynamic versions, the car still smacks of the same quality and class as the conventional Range Rover. Plus, it’s great to drive on the road, as well as genuinely capable off it. Low running costs are certain to make this 148bhp 2.2-litre turbodiesel variant a hugely popular buy as well.

Advertisement - Article continues below
The Range Rover Evoque really has lived up to the hype. It’s already proven it’s far more than a flash Freelander by scooping our 2011 Car of the Year award. Now, we’ve got behind the wheel of the entry-level 148bhp TD4 diesel model, which promises all the glamour with lower bills.
The 2.2-litre engine doesn’t offer quite the same effortless pace as the 187bhp unit. It’s happiest between 1,800rpm and 3,000rpm, when the full 400Nm of torque is easier to access.
Video: watch part one of our video review of the Range Rover Evoque
[[{"type":"media","view_mode":"content_narrow","fid":"68683","attributes":{"alt":"","class":"media-image"}}]]
Watch part two here
At those engine speeds, you won’t really see the benefit of more powerful motors, but let the revs drop, and it struggles a bit with the car’s 1,700kg weight.
The unit runs out of steam at the top end, too, although if you stick to the sweet spot, it’s as capable as any other engine in the range. Our Prestige model came with the six-speed manual box, which delivers a short and firm action. It’s a little tough, though, and doesn’t suit the car nearly as well as the smooth six-speed automatic transmission.
Advertisement - Article continues below
Advertisement
Advertisement - Article continues below

Look at the economy benefits, and this engine makes sense. It claims 49.6mpg combined, as well as a CO2 output of 149g/km. Even more impressive will be the front-wheel-drive eD4 model; it offers 57.6mpg and 129g/km.
Aside from the lower power output, this Evoque is as good as any other. It’s just as classy inside and out, and turns more heads than anything else on the road.
Despite its smaller size and lower cost, the car rivals a conventional Range Rover for build quality. Soft, thick leather offsets the tough, machined instruments and panels, while the high and thick centre console is reminiscent of the Evoque’s big brother. Our one criticism is the glovebox plastic, which isn’t up to the standard of other materials.
The high driving position is a welcome feature carried over from other Land Rovers, giving good forward visibility. Chunky mirrors hamper the view to the side, and rearward vision is limited, too.
Yet while the Evoque is a big car, it’s surprisingly agile on the move. The steering is light, responsive and direct, and the adaptive dampers make for a comfortable ride, with strong grip in most conditions.
It’s not as fast as the higher-powered cars, but this smallest diesel provides decent pace and low running costs. It’s no wonder Land Rover bosses expect it to take the lion’s share of sales.
Advertisement
Share this on TwitterShare this on FacebookEmail
Advertisement