Does a facelift and revised powerplant strengthen big Brit’s position at the top of the luxury SUV class? 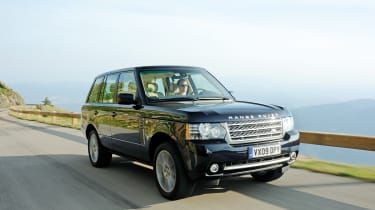 In the current economic and environmental climate, the Range Rover has as many enemies as it does admirers. As a piece of engineering, though, it’s a thing of wonder. On tarmac, its blend of a cosseting ride and outstanding refinement offers complete insulation from the outside world, leaving occupants refreshed at the end of each trip. But the star of the show is the muscular supercharged V8, which has a sensational turn of pace for a 2.7-tonne car. And we haven’t even mentioned the Range Rover’s peerless off-road ability yet! Image issues aside, there is no finer way to travel.

When it comes to luxury SUVs, the Range Rover rules the roost. And now, the best just got better! With a fresh look, new engine and a throng of advanced technology, bosses aim to keep the model’s sizeable nose ahead of the competition for a few years yet.
Crowning the range is a supercharged 5.0-litre V8-powered variant. The engine, co-developed with Jaguar, is already available in the potent XKR and XFR.
Power output has increased to 503bhp – that’s 29 per cent more than in the supercharged Range Rover it replaces – while torque has climbed by 12 per cent to 625Nm. Fuel returns and CO2 emissions have dropped by around seven per cent. That hardly makes the model eco-friendly, but it’s a step forward.

Performance is nothing short of astonishing for a car of this size. The 0-60mph sprint takes 5.9 seconds, which is one-tenth slower than a Porsche Cayman – not bad for a 2.7-tonne off-roader.
For a little less straight-line pace and much better economy, the 268bhp 3.6-litre TDV8 diesel is carried over. But the flexibility of the latest petrol engine is incredible. The all-new LR-V8 has been designed to deliver more torque lower down in the rev range, which results in serene and effortless progress around town. Motorway miles are covered virtually in silence.
Step hard on the throttle and the excellent ZF six-speed automatic gearbox is only too willing to kick down and fire you towards the horizon.
A set of continuously adaptive Bilstein dampers takes care of the Range Rover’s ride comfort. The innovative shock absorbers monitor what’s happening at each wheel an amazing 500 times per second and either firm up or soften depending on the predicted road conditions. It would take more than clever dampers to contain the tall Range Rover’s body roll in corners altogether, but the Bilsteins help it flow well through sweeping bends.
As well as being a brilliant performer on tarmac, the newcomer is as capable as the maker’s more rugged models when the going gets rough.
An improved five-stage Terrain Response system adjusts the car’s set-up according to the surface it’s travelling on. This gives the Range Rover outstanding abilities on landscapes that would be no-go areas for all but a handful of other vehicles. Styling changes are limited to the introduction of new LEDs around the circular headlamps, a more upright grille and a redesigned front bumper.
The model is also identified by the ‘three finger’ design on the side vents, as well as the front and rear light clusters.
But it’s the sumptuous cabin that will win the most plaudits. A 12-inch TFT screen replaces the traditional instrument cluster behind the steering wheel, providing super-slick graphics and dials that can be moved aside to make way for detailed off-roading information. In a world first, the dual-view infotainment touchscreen uses alternate columns of pixels to display a DVD or the built-in TV tuner to the passenger, enabling the driver to view the sat-nav on the same screen.
Elsewhere, the interior is still the best in the business. Flagship variants even get leather-swathed pillars and headlining as standard.
The supercharged version is offered only in range-topping Autobiography trim, and costs nearly £80,000. Yet few other cars offer such a broad range of skills, or more of a feelgood factor every time you get in.
Rival: Porsche Cayenne Incredibly, the 500bhp 4.8-litre twin-turbo V8-powered Cayenne is even quicker than the Range Rover Supercharged. But its straight-line pace and sharp handling come at the expense of off-road ability.
Share this on TwitterShare this on FacebookEmail