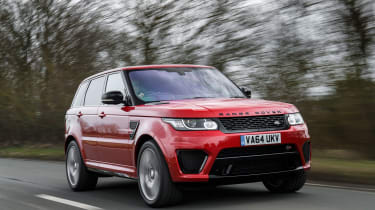 The new Range Rover Sport SVR is some car. It deserves all the success it will undoubtedly achieve in the short term, and in the longer term sets the tone for a whole new way of doing things at the top of JLR. AMG & Co, you have been warned…

The Range Rover Sport SVR represents a new direction for Jaguar Land Rover, and it was the first in a growing range of high performance Jaguar and Land Rover cars (see the Project 8 and Velar SVR as proof) due to hit the streets over the coming years.

Designed to be similar to the RS badge used on recent Jags, SVR branding can be expected to appear right across the JLR range, given enough time. That being said, the launch of Jaguar’s first all-electric car, the I-Pace, may well call for something different, but only time will tell.

The Range Rover SVR flys the flag for the brand very well, with the SUV hitting 62mph from a standstill in 4.7 seconds before ploughing on to its maximum top speed of 162mph. 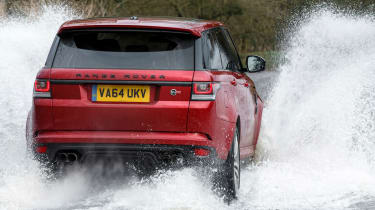 It’s also a car capable of lapping the Nurburgring in a vaguely hilarious 8min 14sec and is, claim its engineers, between 10-15% sharper dynamically everywhere compared with the already tidy Range Rover Sport.

The main areas of development over the standard Sport model centre around the supercharged V8 engine (which now produces a thumping 542bhp and 620Nm of torque), the chassis, the brakes, the interior and the suspension.

The brakes are no bigger than normal but the way in which they are cooled has been significantly improved so that fade, says Range Rover, simply isn’t an issue, not even when lapping the Nurburgring. 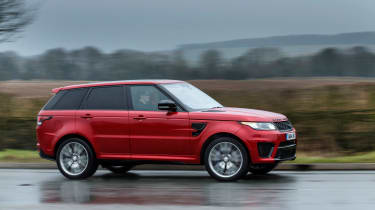 At the front, there’s a deep bumper with three huge, black mesh grilles to help cool the massive engine and brakes, while the clamshell bonnet covers the narrow headlamps that sweep back into the front wings. It’s at the back where the SVR looks most muscular, though. The four exhaust pipes emit a raucous V8 rumble and are integrated into the gloss-black lower bumper, which helps to reduce the car’s aero drag.

Inside, to keep up with the SVR’s extra performance, there are four individual, figure-hugging bucket seats that hold you in place no matter the ferocity of the drive. Like the rest of the cabin, they’re trimmed in plush leather and offer plenty of comfort.

There’s lots of contrasting, brushed-aluminium trim adding to the SVR’s racier feel, but it’s balanced perfectly with supreme luxury. All the materials feel expensive and, as you’d expect from a near-£100,000 super-SUV, you get lots of technology to play with.

The steering and suspension have been tuned to provide crisper, sharper responses than in the regular Sport model, with alterations to the software of the Dynamic Drive system making the SVR feel much more focused on the road, says Range Rover.

And then there’s the new exhaust system, which has again been tuned to deliver an even naughtier noise than you’ll hear in any current Jaguar, reckons Range Rover. Sometimes claims like that make you wonder, but in this case the sound backs up the claim; the SVR Range Rover Sport emits a harder edged bark pretty much everywhere in the rev range, but never more so than under full throttle at over 3700rpm, with its baffles opened wide so that it can be heard from many hundreds of yards away. And if you don’t want to wake the neighbourhood every time you fire up your SVR, you can simply press a button to keep the exhausts quieter and more civilised. For a while… 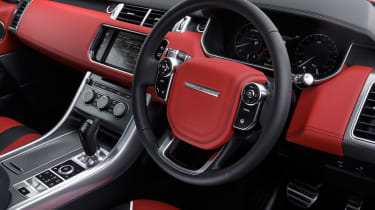 On the road the SVR feels instantly more alive but also much more controlled than the regular models. Roll stiffness is approximately 20% up over the regular Sport, but it’s the steering’s extra feel and response that are most noticeable to begin with. Despite weighing only 40kg less than the standard version, the SVR feels immediately more nimble on its feet as a result.

And boy does it go when you put your foot down. Experiencing this kind of acceleration in a car this big, and which still boasts such a majestic driving position, feels ever so slightly surreal to begin with. In any of its drive modes the SVR feels faster than it has any right to considering it weighs as much as it does (2,335kg). In Dynamic mode, however, with the exhausts on full noise and the throttle and gearshift software in their most aggressive settings, it feels like a proper wild animal in a straight line.

Which is why it’s even more surprising to discover that it now has the cornering composure and braking power to match such thundering performance. It even handles pretty crisply for something so vast, with much more precision on turn in compared with the standard RR and, seemingly, twice as much bite from its enormous – but optional – new 22in Continental tyres. The standard wheels and tyre sizes are 21s but, so far, Range Rover is finding that over 80% of orders are being placed for cars with the new 22in wheels. Which is understandable given how good the thing looks on 22s, even if the ride does suffer a touch during the upgrade. 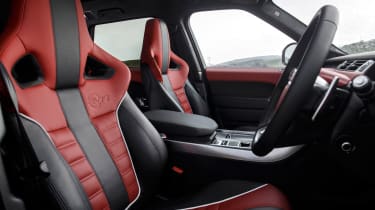 In standard trim the SVR costs an eye-watering £99,680. So although it’s expensive, Range Rover is already discovering that its new SVR is also desirable. Highly desirable. And therefore, in turn, profitable.