Spy shots reveal a Lexus LC F performance model is on the way, while a drop-top version has also been given go-ahead 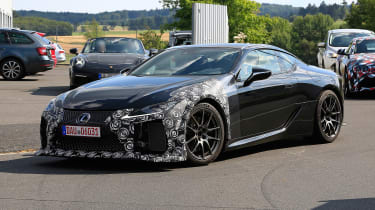 Lexus has plans to add a performance-based LC F to its model portfolio. Spy shots have caught the coupe under going development testing ahead of its expected arrival next year.

The shots clearly show a hunkered-down and beefed-up version of the LC coupe; a more aggressive front bumper, flared arches and performance tyres can all be picked out on the prototype. At the rear a new bumper with a unique exhaust setup indicates that this is no ordinary LC coupe.

Lexus bosses have previously hinted to Auto Express that a flagship LC was on the cards. Yoshihiro Sawa, president of Lexus International, told us earlier this year: “We are studying many possibilities and more power is another candidate. It’s not decided yet but in my mind, a high-performance LC is a good opportunity.” 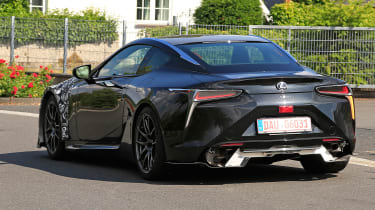 Auto Express’s source suggested the car would be powered by a new 4.0-litre twin-turbo V8 engine developing around 600bhp and not a development of the naturally aspirated V8 in the LC500.

A LC convertible is also expected to join the range, Auto Express understands. The drop-top has been given the green light internally; an inside source at the company said the LC drop-top was a “done deal” and likely to see the light of day within 18 months to two years.

The drop-top will address a major omission in the Lexus line-up; there’s no convertible at present and Toyota’s luxury arm has little pedigree in this area with neither of its previous offerings, the IS C and SC, being especially well received.

A concept in 2014, the LF-C2, strongly hinted that an RC cabrio was coming, but it never came to fruition as the firm switched its focus to SUVs.

However, there is now an acceptance that a cabrio is necessary if Lexus is to be taken seriously as a challenger to the premium German brands. 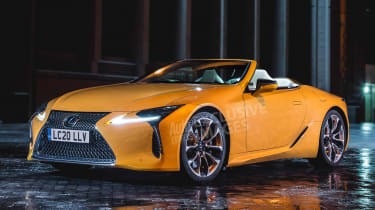 Yoshihiro Sawa, president of Lexus International, told Auto Express: “I hope that we will have a convertible in the near future. We know the luxury market requires a convertible.

“We are always studying the possibilities. And yes, technically it’s possible.”

The engine range for the convertible would likely be shared with the coupé, meaning hybrid 3.5-litre V6 LC 500h and 5.0-litre LC 500 versions would be offered.

Sawa made no bones of his intention to continue the transformation of Lexus. He said: “The perception of Lexus is becoming better and better. We used to be the boring brand. But now it is changing, although we have to push continuously or it becomes boring again.”

Is a high performance LC the right move for Lexus? Let us know what you think in the comments