Lexus' stylish V8 LC proves a worthy alternative to the hybrid, but it's not without its faults 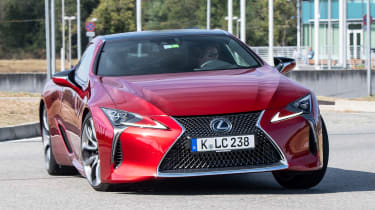 What the LC 500 loses in fuel efficiency to the hybrid, it makes up for in its performance and character. It’s more practical, too, with some useful extra luggage capacity with no battery pack to haul about. It’s quick, refined and handles well, and Lexus shouldn’t have many problems shifting enough to meet its relatively modest sales targets. In fact, it’ll probably sell on styling alone.

Lexus says its new LC is “absolutely not a sports car”. Instead, it’s being positioned as a grand tourer – and perhaps even more importantly than that, a halo car for the brand. It’s a car to show what Lexus is capable of when its finest minds are put together to deliver the ultimate expression of brand values.

We drove an early version of the LC 500h last year and declared it a technological masterpiece. The innovative gearbox and part-electric drivetrain worked well, while the beautifully built interior and strong refinement helped tick the remaining GT boxes. Now we’re driving the production-ready V8 model to see if the extra grunt is enough to make you turn your back on the fuel-sipping hybrid.

With modest targets to sell just 250 cars in 2017, and more than 160 already accounted for, the LC range is doing the business for Lexus before it’s even turned a wheel. Enquiries for the CT hatchback and NX and RX petrol and hybrid SUVs have gone through the roof, too. Job done? Not quite. 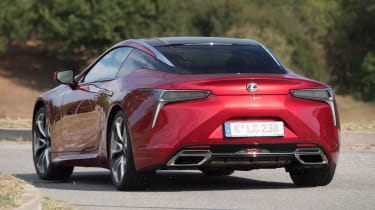 Visually, it’s hard to fault the LC 500, however. It’s a stunning design whether parked up or cruising down the street. Following other examples of the car on its European launch, we saw glimpses of Aston Martin in the car’s slim rear lights and strong haunches, while up front the LC has undoubtedly the best integrated version of the brand’s ‘spindle’ grille design yet.

The cabin is just as impressive. The materials feel expensive to the touch and well put together, and some of design touches really stand out. The aluminium door handles that seem to float in the Alcantara-trimmed doors, for example, and the outstandingly comfortable seats (again trimmed in Alcantara in the Sport+ model tested here) are both heated and cooled – ideal for those long drives.

Ahead of you sits a TFT instrument display with a central rev counter, while a pair of rotary controls sprout from either side of the instrument binnacle. The dial on the left can be used to turn off the traction control, while the right-hand control switches between the car’s many drive modes – Eco, Comfort, Normal, Sport and Sport+. They look a little odd, but they’re surprisingly intuitive to use – both are just a glance away, eliminating the need to root around on the centre console to toggle between modes.

Press the starter button and the 5.0-litre V8 from the Lexus RC F fires into life before settling to a cultured idle. It sends power through a new 10-speed automatic gearbox, the second to fourth ratios of which have been spaced evenly – something Lexus says helps you to develop a “rhythm” in brisk driving. Changes are swift and best actuated using the large paddles behind the steering wheel, but they’re still not quite as seamless as the best dual-clutch gearboxes. 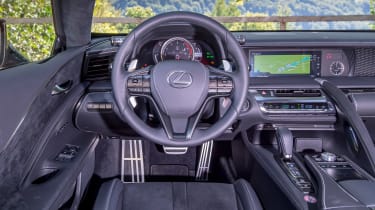 Lexus has worked to make the V8 both more refined and more characterful in this application. Some harshness has been removed, but a tube from the engine to the cabin transfers the V8’s more pleasant frequencies through under hard acceleration. Valves in the exhaust system open according to your driving style, and release a glorious noise, with a bonus crackle on full-throttle gearchanges.

Those used to the punchiest turbo engines will find the naturally-aspirated unit a little flat at first, but there are real thrills and strong acceleration available if you’re prepared to use all the revs.

There’s a good chassis underneath the LC 500, too. Sport+ models get dynamic rear steering, giving the LC a very agile feel through tight corners and a reassuring stability at higher speeds. We’d like more steering feedback, but there’s enough to get an idea of what the front tyres are doing. There’s plenty of grip, too.

With the same pliant ride and silent cabin as the LC 500h, but a greater turn of pace and a larger boot, it’s also a more effective grand tourer than its hybrid brother – though the 60 per cent of UK buyers expected to choose the V8 will have to accept higher fuel consumption as a penalty for the more involving drive.