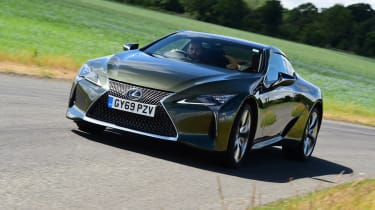 The Lexus LC is overlooked as a two-door sports car. It may not have the Porsche 911’s precision, but its 5.0-litre V8 is one of the finest engines on the road, and the car looks like nothing else – especially in this Limited Edition spec. However, you’ll have to really like the colour scheme, because on this model it’s take it or leave it. But if you’re in the market for a premium sports car, then the LC remains a credible option.

If you’re in the market for a two-door sports car with north of 400bhp, the answer is usually a very simple one: a Porsche 911. The German manufacturer has had this corner of the market sewn up for decades, which makes it incredibly tough for newcomers wanting to make an impact.

The Lexus LC500 is one of those brave few to have made an attempt. It was launched back in 2016, and the model still sells in comparatively tiny numbers, which is a shame, because there’s no doubt it’s a brilliant take on the two-door theme.

This new Limited Edition version has been spruced up with some unique finishes inside and out; the LC was hardly lacking in appeal, but this subtle update now makes it one of the most striking cars on the road. Every model comes finished in a shade of green Lexus calls Terrane khaki, along with a pair of arch-filling 21-inch alloy wheels. It’s not a car that creeps by unnoticed.

The cabin is equally eye-catching. Its Saddle Tan leather seats are another unique feature, as are the chocolate-coloured suede door cards and Amber black leather dashboard with brown contrasting stitching. Of course, the colour scheme won’t be to everybody’s tastes, but one thing you can’t question is the level of quality and detail inside. Every button, knob and dial operates with real tactility, and every surface is perfectly trimmed; this is one of the finest interiors of any new car on sale. 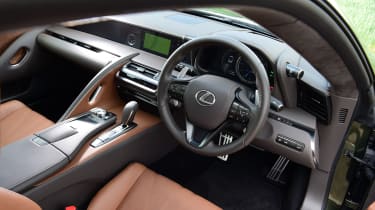 One thing buyers do have some choice over is the powertrain; this Limited Edition model is available with the option of Lexus’s 3.5-litre V6 hybrid set-up or the thumping 457bhp 5.0-litre naturally aspirated V8 that was fitted to our test car. This drives the rear wheels through a 10-speed automatic gearbox.

The changes to the Limited Edition are purely cosmetic, so the LC500 remains as it was from behind the wheel. Despite its appearance and huge V8 under the bonnet, the LC is more of a long-legged cruiser than an outright sports car. Part of that comes down to its sheer weight, which is only a large lunch away from two tonnes.

Despite its mass and the enormous 21-inch wheels, the LC’s ride quality is very good for the most part. It’s fluid and supple at high speed but soft and forgiving at lower speeds, while the gearbox makes its way through its 10 ratios seamlessly, keeping progress hushed and relaxed. However, hit a series of potholes or imperfections, and the suspension struggles to control the car’s mass, sending thuds into the cabin.

The engine also needs to be worked to get the best out of it; unlike many rivals, this V8 isn’t turbocharged. Throttle response from a standstill is a little languid, but as a trade-off you do get a smooth and predictable power delivery alongside a bass-heavy V8 soundtrack.

Wind the car’s 5.0-litre engine up beyond 4,000rpm and it really starts to pull, while the 10-speed automatic thumps home changes in its more aggressive Sport and Sport+ modes. You’re unlikely to ever be in the right gear at the right time, but paddles can override the car’s decisions. The upper ratios are best left for faster A-roads or motorways, where the LC will return almost 30mpg on a long run. 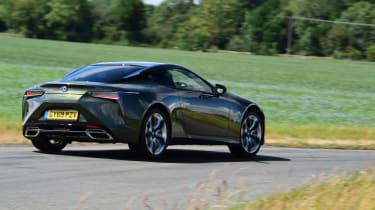 The Lexus doesn’t handle with the sharp reactions or responses of a 911, and there’s a touch more body roll as you enter a corner than we’d like, but that’s unsurprising given the car’s weight. The steering is quick – perhaps a deliberate attempt to add a sense of agility – but it’s pretty numb and doesn’t relay any meaningful feedback through the rim.

On a practical level, the LC also has some flaws. The rear seats are incredibly cramped and only really usable as extra luggage space; which is actually rather helpful since the 195-litre boot is tiny and not a very useful shape. A common niggle with all Lexus models is the infotainment system, which is beautifully integrated into the dash, but hideously fiddly to operate using the trackpad. The screen is also on the small side and often overloaded with information, too.