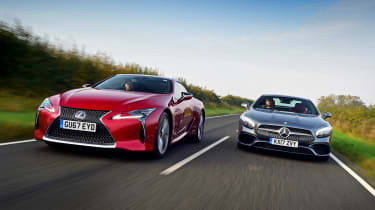 Aside from the stunning LF A, Lexus’s performance coupes have always majored on looks and fallen short when it comes to dynamic performance. But with the LC, the Japanese brand is hoping to change things.

We’re testing the LC 500h hybrid model here that aims to balance head-turning style with electrically assisted performance and, as a result of the hybrid system, respectable fuel efficiency, too.

Mercedes’ SL offers a similar solution to the same problem. While the German car does without hybrid power, it has a different niche with its folding metal roof. The question is, where is your £75,000 or so better spent? 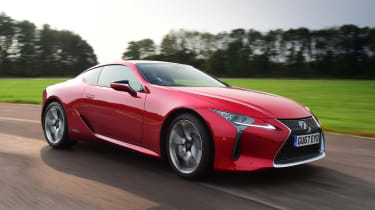 There are a number of intriguing details about the LC 500h, but it’s the styling that grabs your attention. With its concept car shape and sharp, heavily raked roofline, this is one  of the best-looking coupés at any price.

Under that long bonnet, there’s no exotic, ultra-powerful, turbocharged engine. However, you still get a lot of tech thanks to the new GA-L Global Architecture – Luxury platform (making its debut here) and the hybrid powertrain.

It’s a 3.5-litre V6 linked to an electric motor giving a total of 354bhp as part of Lexus’s new Multi Stage Hybrid System, which is said to boost acceleration. That’s not a huge amount of power in a car weighing 1,985kg (thank the big battery pack for that kerbweight), but the advanced gearbox does its best to make the most of the performance. 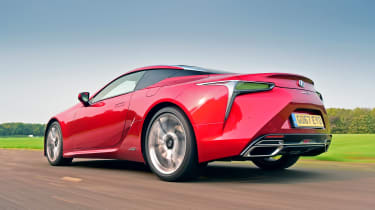 In fact, the Lexus has two transmissions. The first is a CVT that can keep the revs at a constant point, whether for maximum performance or optimum efficiency. The second is a four-speed auto that changes the output in stages to provide a wider spread of usable torque, while helping to give artificial ‘steps’ to simulate real ratios.

There are 10 of these steps, making the LC more natural to drive. But at full throttle the box defaults to CVT mode, pushing the revs higher for maximum acceleration. It meant we couldn’t accurately record ‘in-gear’ performance times, although there’s still enough straight-line speed.

The LC 500h accelerated from 0-60mph two tenths faster than the Mercedes, in 5.8 seconds. Considering the car’s kerbweight, the electric assistance helps off the line and when going for overtakes on the road. However, the electric motor is also the cause of one of the LC’s faults. 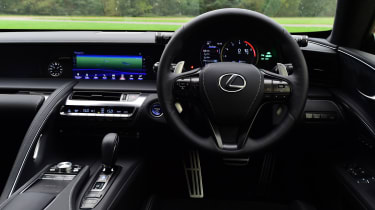 It works in reverse as a generator to help recharge the battery when braking, but it means pedal feel is distant and doesn’t inspire confidence when pressing on. It also makes it harder to bring the car to a smooth stop in town; given the LC’s remit as a comfortable GT, it’s a small annoyance.

Still, elsewhere the Lexus fulfils that role very nicely indeed. Even on optional 21-inch wheels as part of the £9,300 Sport Plus pack, the LC rides nicely, while this Sport Plus model’s rear-wheel steering means that, despite the long wheelbase, it changes direction quickly, even if there’s not much feedback through the lifeless set-up.

Importantly, it is predictable, and combined with a limited-slip differential, the LC’s balance is safe – but the chassis can be coaxed into indulging in some welcome sporty behaviour. 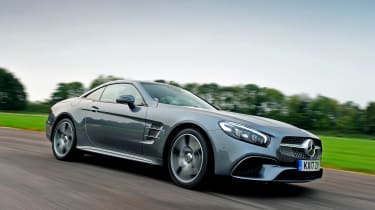 Although it was facelifted in 2016, this sixth-generation SL was first released in 2013, so it’s no surprise that the cracks are beginning to show against more modern competition such as the Lexus LC 500h. However, the Mercedes roadster has an appeal all of its own, thanks to its folding hard-top.

You can operate it on the move in less than 20 seconds at up to 25mph – and even if it’s cold, the car’s Airscarf system (£575) blows hot air on to your neck to keep you warm. There are heated seats, too.

On top of this you get all the equipment you’d expect from a £75,000-plus convertible: sat-nav, DAB radio, Bluetooth, LED lights and a reversing camera are all included. 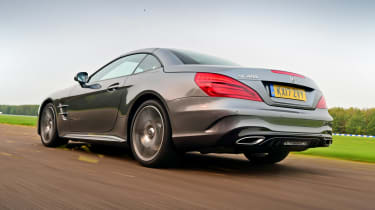 However, the Mercedes’ cabin is even more cramped than the confined Lexus’s, while some of the materials inside are of questionable quality in a car with such a hefty price tag.

While the roof adds an extra dimension to the experience, it isn’t without its drawbacks. It limits headroom and hampers luggage space when it’s folded down and stowed in the boot.

You also feel the dynamic compromise of this set-up, because the SL isn’t as sharp to respond to your inputs, while the firmer ride even in the adaptive dampers’ comfort setting means big bumps send a quiver through the structure as the SL wobbles and loses some composure.

It’s pleasant on the motorway and a flowing road at a more leisurely pace, though, and with the roof down, it gives you even better access to the 362bhp 3.0-litre V6’s creamy exhaust note. 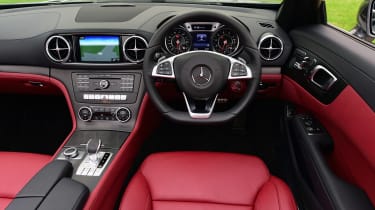 On test the Mercedes accelerated from 0-60mph in 6.0 seconds, just two tenths behind the Lexus. Although it’s 250kg lighter than the LC, this is still a heavy car, and while traction off the line was good, the gearbox isn’t super-snappy moving up through the ratios.

It’s a nicer powertrain than the hybrid Lexus’s, however, even with the engineered steps in the LC’s box. The Mercedes’ nine-speed auto is smooth and handles changes almost imperceptibly, while it’s just fast enough if you take manual control with the gearshift paddles.

It’s hard to compare in-gear pace due to the different transmissions, but the SL matched the LC from 30-50mph, taking 1.8 seconds in third. It was also faster through the gears from 30-70mph, posting a time of 4.2 seconds, which was three tenths ahead of the Lexus. 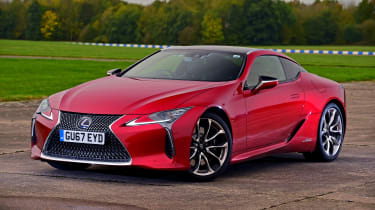 The Lexus LC is a beautifully built GT and in 500h hybrid form it’s a relaxed cruiser. It offers respectable agility and pace without hurting refinement, giving it a broader operating range than the SL. The Lexus has a more modern, higher-quality feel than the Mercedes. 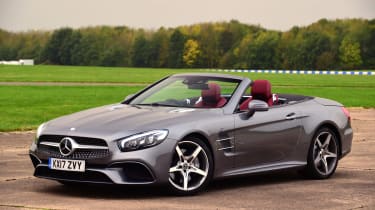 Time is starting to catch up with the SL. It’s still a feel-good machine, but the cramped cabin, archaic infotainment, poor ride and sloppier dynamics mean it can’t match the Lexus, even if the engine and gearbox are nicer. However, that convertible roof still adds interest.