The sleek new 8 Series aims to wrestle the crown from our reigning Best Coupe, the Lexus LC 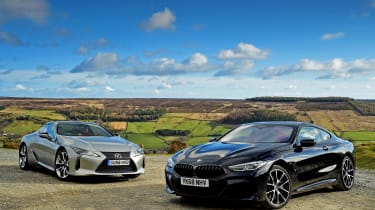 Nothing quite makes a style statement like a big coupe. Even though SUVs have become more popular and offer an upmarket image, large two-door models such as this pair still turn heads easily.

The BMW 8 Series is the latest big coupe out there, and we’ve lined it up in 840d xDrive trim to take on our current Best Coupe, the Lexus LC 500h. Both models boast long, low silhouettes, great quality and lots of kit, and wrap it all up in a strikingly styled package, but which is better?

They’re pricey, although only £325 separates them, and in diesel and petrol hybrid form respectively, they should deliver decent economy from two different approaches. 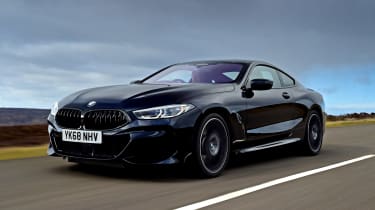 For: Excellent infotainment, strong performance, more practical than Lexus.Against: Ride is still too knobbly, has small rear seats like the LC.

While much of the technical innovation in the LC centres on its hybrid powertrain, the BMW boasts some fairly advanced engineering in its chassis. It’s based on the German brand’s CLAR architecture, which has been adapted for many of its SUV and saloon models, such as the 3 Series, 5 Series and 7 Series, but along with the latter, the 8 Series is one of very few cars to employ the Carbon Core construction.

This uses lightweight carbon-fibre composites to help keep this sizeable coupe’s bulk to a more modest level. It weighs 1,830kg, while the Lexus tips the scales at 1,985kg. That difference is partly explained by the fact the LC has a battery and electric motors. 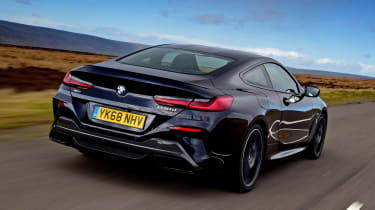 Weight isn’t necessarily a bad thing in a luxury car, especially when it’s powered by an engine like this. The 3.0-litre diesel’s 316bhp and 680Nm of torque are available from just 1,750rpm, meaning there’s a superbly gutsy level of performance in any gear.

Put your foot down and even at low revs the eight-speed automatic transmission doesn’t look to kick down too soon, choosing to lug hard rather than drop a gear, raise the revs and ruin refinement. Even when it does, the box is smooth so it doesn’t shatter the engine’s easy-going nature.

The 840d wafted from 50 to 70mph in seventh in just five seconds, for example. It’s difficult to compare directly against the Lexus’s CVT, which doesn’t have any gears, but performance here is more than adequate. With four-wheel-drive traction, the BMW covered 0-60mph in a blistering 4.4 seconds, compared with 5.0 seconds for the LC, while accelerating hard from 30-70mph the 840d took 4.3 seconds. The Lexus did it in 4.5 seconds.

The six-cylinder motor even makes a pleasant, muted rumble. It’s enhanced in Sport mode and sounds artificial, while the gearbox sharpens up further, the steering weights up and the dampers tauten. Be careful on this last point, because on 20-inch wheels the 8 Series’ ride isn’t perfect, even in Comfort mode. Thanks to the long wheelbase, it’s compliant and controlled over softer, more rolling bumps, but the big alloys and slim sidewalls make it clatter over sharper imperfections at speed. 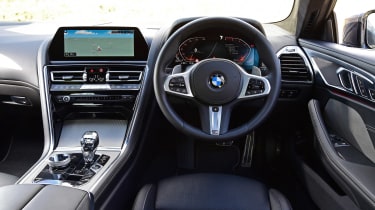 That’s a shame, because otherwise it’s superbly refined and matches the LC. Cabin quality is good, with only a few areas that are questionable – around the cup-holders, for example – yet the heated leather seats and the driving position are nice.

Standard kit includes cruise and climate control, keyless operation, Apple CarPlay and nav, a digital dashboard, adaptive LED lights and a reversing camera, plus M Sport brakes – although the feel through these could be much better. 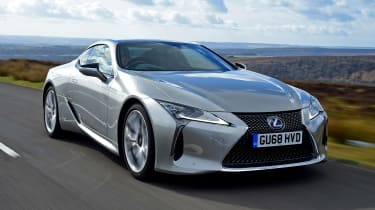 Before you’ve even driven the Lexus, you’re wowed by its styling; the brand should be commended for taking on such a bold look. Like the BMW, it’s long, elegant and uses interesting body surfaces and stand-out light signatures.

There’s as much interest beneath this skin, too, because the LC sits on Lexus’s Global Architecture – Luxury (GA-L) platform, and in 500h trim pairs a naturally aspirated 295bhp 3.5-litre petrol V6 with two electric motors for a total of 354bhp.

A lithium-ion battery supplies this dual-motor system, but electric-only range is still limited. Still, it’s quite a boost; the LC sprinted from 0-60mph in 5.0 seconds – not bad for a sizeable coupe weighing nearly two tonnes. Accelerating from 30 to 70mph took 4.5 seconds, but we couldn’t compare it to the BMW’s in-gear times due to the LC’s transmission. 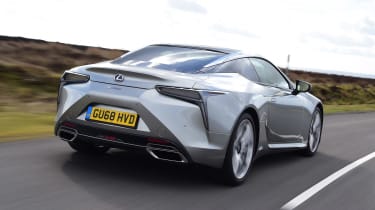 It’s a CVT automatic that can constantly vary revs depending on whether maximum performance or optimum efficiency is required. Lexus worked hard to eradicate the ‘rubber band’ feel you often get with these set-ups, making the connection between powertrain and driver more direct. It’s a move in the right direction, and the 10 artificial ratios make it feel more natural when cruising, but hit full throttle and the CVT will override this, sending revs high.

This is why it’s best to adapt your style and drive with the benefit of the electric motors in mind, using their power to help progress. But they’re a hindrance as well, because they work in reverse when slowing down to charge the battery. This means the brake pedal feel is spongy at first, then solid.

Neither car is that sporty, so curb your enthusiasm and play to the LC’s strengths and there’s some talent to tap into. It’s relaxed and makes swift enough progress, but we’d still like a stronger connection to the car through the engine, gearbox and chassis. 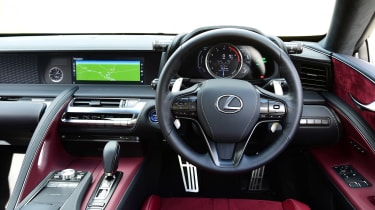 The nicely weighted steering feels mushy and resistive when applying lock into corners. There’s no hiding the LC’s mass, either, because it doesn’t have the grip or agility of the BMW, even though the 840d isn’t exactly a communicative driver’s car. Rear-wheel steering (only available on cars with the Sport+ pack, as in our pictures) helps its agility, but it’s not as effective as the 8 Series’ similar tech.

We can’t fault the LC’s build and material quality. There are fewer obvious areas made from cheaper plastic, while the design has the individuality we’ve come to expect. It’s not trying to ape rival brands. The infotainment system is woeful, but at least you get Lexus’s Safety System package, climate control, heated and cooled leather seats, auto high beam LED lights, a reversing camera and a head-up display. 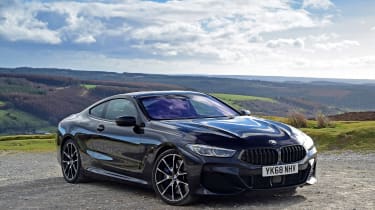 The BMW 840d feels like neither a grand tourer nor a sports coupe. Although its ride is a bit knobbly, it’s still comfier than the Lexus, faster and more economical (but will cost a little more to run) and offers far superior infotainment, while quality is mostly a match. It wins here by a very fine margin. 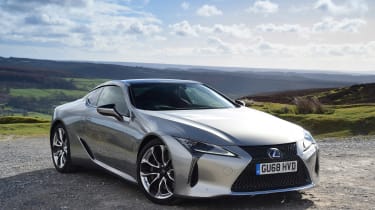 The LC has an arresting design that doesn’t sacrifice usability too much, but the 840d is more practical. The Lexus is quick enough and a refined cruiser, while running costs and efficiency are strong. It could ride better, but quality is first rate, which makes the terrible infotainment even more frustrating.