With the Lexus IS C, the Japanese maker drops the top of its popluar saloon, but raises the price without living up to expectation 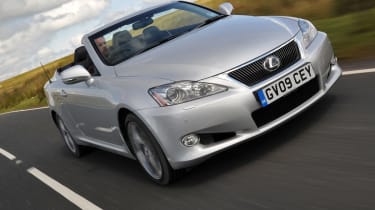 Lexus is synonymous with comfortable, well-assembled vehicles, and in this respect this IS 250C convertible lives up to the manufacturer’s reputation. Its cabin, albeit conservative, is considerately designed and beautifully appointed, and the lines of the bodywork are appealing and tidy, although not exactly eye-catching. The three-piece retractable metal roof unfolds in just 20 seconds, faster than most of its competitors, which transforms the Lexus into an all-year-round mobility solution. This doesn’t only insulate better than a fabric top against the weather, but it also deters thieves. Not that any self-respecting crook would make off in this drop-top mind, the poor performance of its single engine option makes the IS 250C a very unlikely getaway car.

With only one engine to chose from in the UK, the Lexus IS 250C can't rival any of the other convertibles in both efficiency and performance. On paper the 2.5-litre V6 looks like a worthy candidate for performance, but in reality it produces a limp 205bhp and 186lb ft of torque. To make up for the loss of the roof, extra body stiffening adds an extra 125kg to the kerbweight of the saloon, and when that’s coupled with a standard automatic gearbox, the result is very undewhelming. Nevertheless, thanks to soft suspension it offers a comfortable ride, which will suit those who don’t want to throw it round corners.

The Lexus IS 250 C isn’t an over expensive convertible to buy, however it does cost enough more than the basic BMW 3 Series, to make you think twice. However, if you add the same level of standard Lexus specification to the BMW, then the IS C is better value. The basic SE-I model features leather seats, alloy wheels, parking sensors and cruise control. Running costs aren’t the Lexus's strength though and its 2.5-litre V6 engine returns a poor 30.4mpg on the combined cycle. Add to that high annual Road Tax, plus relatively expensive servicing costs, and the Japanese cabriolet starts to look like a money burner.

The Lexus IS C broadly follows the same lines as the saloon version of the car that dates from 2005. Considering this, the vehicle is a compliment to the Lexus designers, as it doesn’t look dated against its competitors. Its design is also backed up by science, and Lexus claims that it has a coefficient drag of only 0.29 which leads to a quieter ride and lower fuel consumption. With a raised bonnet, with low set headlights, it is similar to the Volvo C30 from the front, although the front bumper doesn’t protrude so sharply. The boot has been elongated to fit the folding roof, which slightly spoils the car’s proportions.

The cabin is comfortably quiet and would suit both every day comuting and long road trips. An eight-way electrically adjustable driver’s seat is standard and will enable most people to get comfortable. Despite boasting four seats, the IS 250 C wouldn’t be adapted to a group of six-footers. Legroom in the back is rather cramped and when the roof is up, there isn’t a wealth of headroom either. The boot however is cavernous and big enough to fit large suitcases, the week’s shopping and even several golf bags, that is of course, if the roof is up. When it is down, this space is reduced to a fraction of that and at best can fit a couple of rucksacks.

In terms of reliability, Lexus has an excellent name. Each year it performs brilliantly in customer satisfaction surveys, and the IS, on which this convertible is based, is no exception to the rule. As with many coupe-cabriolets, the most likely source of trouble could come from the folding roof mechanism, which is a new design and therefore unproven. Other than that, the car is beautifully engineered and well assembled – many luxury European manufacturers can only envy its minute panel gaps and solid interior. Front, side and knee airbags, along with active anti-whiplash head restraints, add to the car’s sensation of solidity and protect those in the front. A host host of electronic aids, including stability control and electronic brakeforce distribution, help ensure none of it is put to the test.

More on IS Convertible 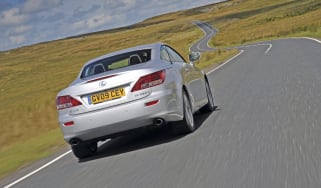 Is folding hard-top version of compact exec a Brit hit? We reveal all.
Skip to HeaderSkip to Content