Is folding hard-top version of compact exec a Brit hit? We reveal all. 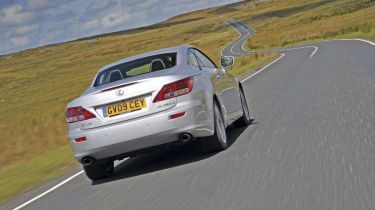 The beauty of the IS 250C really is in the eye of the beholder. If you’re looking for a stylish and refined open-top cruiser with plenty of equipment, it’s very competent. But if you want a fun convertible sports car the Lexus will disappoint. The high entry-level price is also a concern.

Britain is one of the biggest markets in Europe for cabriolets, so there’s never a bad time to launch a soft-top – even in the midst of a disappointing summer.

We previously drove the new Lexus IS 250C on France’s most demanding roads. Now, we’ve got the keys to a UK-spec model to see if it’s up to the challenge here.

As its name suggests, the car has a 2.5-litre petrol engine – the only option for British buyers. It delivers 205bhp and 252Nm of torque to the rear wheels, and sounds great. But the Lexus weighs in at a hefty 1,730kg, which means the sprint from 0-62mph takes a rather slow nine seconds.

We drove a six-speed auto, and it rarely felt as if it was in the correct gear due to sluggish up and downshifts. But on flat, straight roads, the IS 250C is a capable cruiser, and ideal for long-distance journeys.

More reviews for IS Convertible

Fuel economy is quoted at a reasonable 30.4mpg, although CO2 emissions aren’t especially impressive, at 219g/km.

Inside, the leather seats are comfortable, and the versatile driving position gives a great all-round view. The soft-touch dash looks great, too, while there is a long list of equipment as standard. Our top-of-the-range SE-L gets sat-nav and a 12-speaker Mark Levinson stereo, although these are options on other models.

In the back there’s space for two passengers, yet head and legroom are limited. With the roof up, boot capacity is 583 litres, but it falls to 235 litres when it’s down.

Flick a switch, and the top folds electrically in a mere 21 seconds – Lexus claims it’s the fastest operation of any three-piece metal design.

On the road, refinement is first class, with an impeccable ride on all surfaces. Interior noise with the hood up or down is almost non-existent.

But the handling is flawed. Despite the best efforts of Lexus’ engineers to stiffen the chassis, body roll remains a big issue in corners and the car lacks grip.