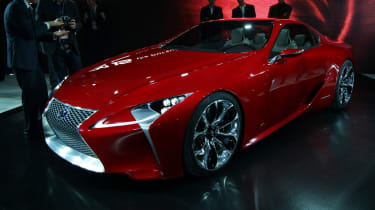 Lexus has its sights set on the Aston Martin DB9 with its stunning LF-LC concept, revealed in Detroit. Lexus is calling this car the start of a new phase - signalling its intent to inject more emotion and desireability into its products.

The car is officially described as an exercise to explore the future of Lexus design, but we spoke with Ian Cartabiano, Studio Design Manager at Lexus' Calty studio, based in Newport Beach, California, who has other ideas: "It's taller and longer than the LFA and a genuine 2+2, so is more of a GT coupe than a supercar. We see it as an Aston Martin competitor more than a BMW 6 Series rival. We'll be judging reactions over the next couple of days and if it's positive, who knows, we could make it."

Video: watch our video of the LF-LC at Detroit

The 2+2 features a host of dramatic details. Most obvious is the targa-style glass roof, which combines with a long bonnet and chunky A-pillars. At the front is an even more aggressive version of Lexus’ latest family nose – first shown on the LF-Gh concept, which previewed the new GS.

But the LF-LC features an even more prominent grille, as well as striking triple LED headlights and a pair of huge intakes that feed air to the brakes. At the back it takes its inspiration from Lexus’ LFA supercar, with a pert tail, LED rear lights and more air vents. Inspiration for the tunnel-like rear lights is said to come from the afterburners of a F-22 jet fighter.

The LF-LC is stuffed with technology too, including two 12.3-inch LCD screens, one that functions as the instrument panel and another sitting on top of the dash. There's a control panel below - a bit like an angled iPad - which allows the driver to execute more complicated commands. Instead of toggles to control the windows and mirrors there's touch pads on the door panels.

There's no official word on the engine yet, only that it's a next-generation hybrid powertrain, with over 500bhp, and power i sent to the rear wheels.