Lexus reveals LC 500h hybrid coupe will get a 3.5-litre V6 with electric motor and 354bhp 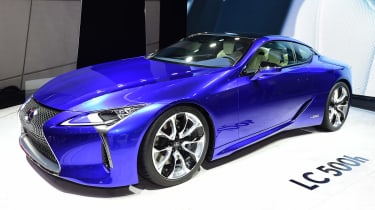 Lexus stormed into the 2016 Geneva Motor Show with the LC 500h, the hybrid version of the stunning V8-powered coupe shown at Detroit, and the Japanese firm has revealed further details of the innovative new petrol-electric powertrain.

The brand’s flagship two door gets a newly-developed “Multi Stage Hybrid System”. The Lexus LC500h takes the same 3.5-litre V6 ‘Atkinson cycle’ petrol engine mated to an e-CVT transmission as the GS450h saloon. In the coupe the engine produces 295bhp, but the total system output is rated at 354bhp.

However, it also incorporates what is effectively a second gearbox: a conventional four-speed automatic is mounted on the back of the electric motors which allows a total of ten gear changes. Six are simulated by the CVT transmission, four are physical changes from the automatic ‘box (and one of those is an overdrive function). 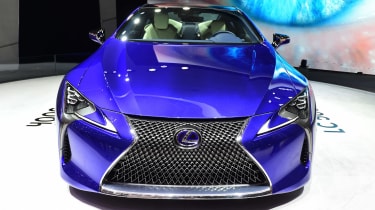 Lexus engineers created this system after carefully considering a dual-clutch automatic, but for ultimate smoothness, practicality and durability the multi-stage setup was instead used.

Head of Lexus Europe Alain Uyttenhoven said this is the first hybrid system the firm has developed that can “light up its rear tyres from a standstill”. It’s also the first Lexus hybrid to use a lithium-ion battery, which is so compact and light it offsets the extra weight of the new gearbox,

Lexus claims it had “ostensibly opposing goals in mind” with the LC 500h compared to its other petrol-electric cars to “create a hybrid with a more sporting and engaging driving experience”. The system delivers a “closer alignment between engine speed and throttle inputs”, removing the often-criticised ‘rubber-band effect’ in CVT hybrids where engine revs soar unpleasantly. 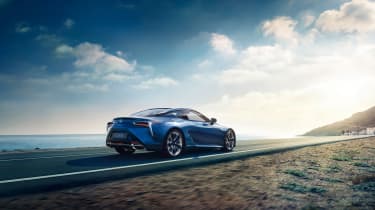 As a result, the LC 500h promises a 0-62mph time “brought well into the sub-five-second range”, although no top speed details are released. The four-speed auto also allows a manual change mode, while the lithium-ion battery and new, more compact electric motor means it weighs the same as a conventional hybrid system.

We don't know if it will match the LC 500's naturally-aspirated 5.0-litre V8 for performance, however. That car manages 0-62mph in 4.5 seconds thanks to a 467bhp output, with drive hitting the rear wheels through a new 10-speed automatic gearbox.

We also don’t have full economy and emissions figures, but expect it to be one of the more efficient performance coupes on the market. The only fly in the ointment is the BMW i8, which uses a plug-in hybrid system and claims a startling fuel economy figure of 134.5mpg. 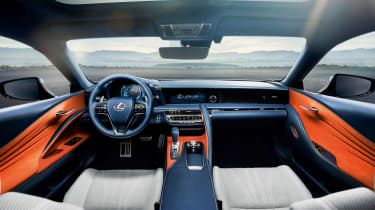 The 500h shares an all-new GA-L platform with the LC 500, using high-tensile steel in the chassis and aluminium in the bonnet and wings. The door skins are mounted on a carbon-fibre structure, while the bootlid is a carbon and glass composite. Inside, it gets the same 2+2 cabin layout, digital dash interface and Lexus’ next-generation infotainment system.

The LC 500h doesn't have a confirmed launch date or starting price, but we're led to believe customers can place their order towards the end of this year. We’ll bring you all the details as they come through when our reporters head out to Geneva.