We get behind the wheel of the all-new Lexus IS saloon, ahead of its arrival on UK roads in the summer 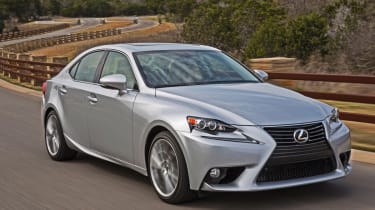 The lack of a diesel engine will limit the IS’s success in Europe. Overall, though, this sharply tuned Lexus is a breath of fresh air from a manufacturer seeking to emerge from its staid past. There’s something to be said about the seamless way the IS goes about its business with its refined manners, well tuned chassis and agile feel.

The Lexus IS has always been an alternative choice in the compact saloon sector, but an aggressive new look and sportier chassis set-up mean this all-new version has the class leaders in its sights. We grabbed an early drive on US roads ahead of the UK launch this summer.

Adopting Lexus’ ‘spindle’ grille design, the IS is now much better looking. Two-piece headlights, with boomerang LEDs underneath, look fantastic, as do the wraparound tail-lights and upswept side skirts.

Inside, things are orderly and upmarket, with materials that put more expensive cars to shame. Chunky air-con controls and a thunderous Mark Levinson audio system with ceramic control knobs are particular highlights.

Aimed specifically at fleet buyers, a 99g/km IS 300h hybrid will be offered from launch, alongside the V6 petrol-powered IS 250 driven here.

No diesel is planned, although a 2.0-litre four-cylinder turbo is rumoured to arrive in two years’ time, which could improve the IS’s prospects in Europe.

The IS 250’s 2.5-litre V6 is carried over from the old car but, with 201bhp and 250Nm of torque, it isn’t overshadowed by more modern engines. Its ultra-smooth and predictable throttle response is rare in an era of peaky turbocharged engines, and there’s strong acceleration when you floor the throttle.

On the efficiency front, the IS 250’s estimated fuel economy of 35mpg falls well short of the four-cylinder BMW 328i, which produces 245bhp and returns 44.8mpg. But driven carefully, the V6 IS shouldn’t break the bank.

We drove the top-of-the-range Premier model (pictured here) and an F Sport version with stiffer suspension. Although no power boost is included, the F Sport tweaks give the car a genuinely sporty, natural feel – something that has been difficult to say about a Lexus in a long time.

Standard models are firm but still offer excellent control. The F Sport is stiffer, but the rewards are a more direct feel to the steering and enough agility to make you seek out twisting roads.

Settle into a cruise and Lexus’ legendary refinement is still there, but it’s the new found sporting edge that’s the big news here.

F Sport trim also adds a trick instrument cluster with a speedo that electronically moves out of the way to expand a multifunction screen, while controls on the centre console let drivers select between Eco, Normal and Sport modes. The former restricts the throttle and dials back climate control, while the latter firms up the steering and alters the transmission’s shift points.

The IS is not an out-and-out performance car, but it’s polished on the road and attractively appointed inside.