Lexus RC F Carbon Edition offers carbon fibre add-ons and other extras for an £8k premium. Is it worth it? 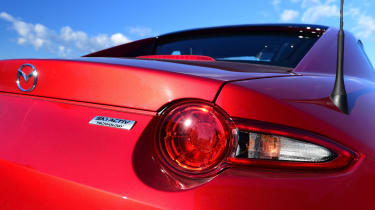 If this RC F was significantly lighter and faster than the standard car, then this package would be worth its weight in gold – or carbon. But as it stands, the black bonnet, roof and spoiler look at odds with the car’s usually classy appeal. Save your cash and go for the basic RC F, or better still, a BMW M4.

The Lexus RC F has only been on sale a matter of months, but Lexus has already spruced it up with some carbon fibre add-ons and an £8,000 price hike.

Available as a standalone model rather than an optional extra, the RC F Carbon gets an unpainted carbon fibre bonnet, roof and spoiler. It weighs 10kg less than the standard car but boasts identical performance figures from the ballsy 5.0-litre V8.

That means it still does 0-62mph in 4.5 seconds, and will keep accelerating to an electronically limited 168mph. There’s no denying it’s fast, but it doesn’t feel as urgent as turbocharged rivals like the BMW M4 – even in Sport or Sport+ mode. 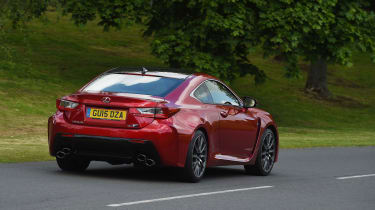 The Carbon edition adds the £3,500 Torque-Vectoring Differential as standard, improving agility and making the car more responsive. It goes someway to disguise the car’s weight, but can feel artificially snappy on turn-in – almost as if it is trying to anticipate your manoeuvre using various clever computers.

Inside, changes to the cabin are few and far between, meaning you get the same well-built dashboard, TFT dials and touchpad control system. All Carbon models also get a 17-speaker Mark Levinson stereo, over and above the normal RC F’s 10-speaker Pioneer setup, while as before each car gets heated and ventilated seats, dual-zone climate control and rain sensing wipers. 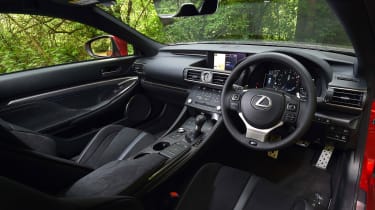 The thick-rimmed, leather wrapped steering wheel feels beautiful to hold and the Alcantara bucket seats (the standard car gets leather) mean long-distance cruising remains a pleasure, rather than a chore. However, as you build speed you can watch the carbon bonnet flex and wobble with ruts in the road, where the standard car looks and feels solid – even on the motorway.

Where the stock RC F blends that old school muscle car feel with all the usual Lexus luxuries, this Carbon pack adds little else other than some Fast and Furious-style add-ons and a trick differential. Save your cash and go for the standard car – or better still, a BMW M4.