Can a mild facelift be enough to keep the Lexus RC a serious competitor against its German rivals? 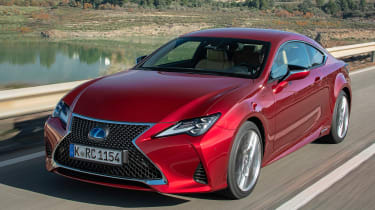 A minor facelift has done little to dent the RC’s dramatic visual appeal – it still stands out from its German competitors and it’s all the better for that. Lexus has also tweaked the steering and suspension, but while this has improved, it's in terms of road manners that the RC still doesn’t feel as fun or involving to drive as a BMW 4 Series or a even a Mercedes C-Class Coupe.

Much like the brand new ES saloon that’s being rolled out this month, the Lexus RC coupe has faced formidable competition from three well-loved German rivals ever since it appeared in 2016. But the Lexus always had a card up its sleeve and that was the way it looked.

The RC’s gaping grille, bulbous wheel arches and creases and slashes adorning every body panel made it a far cry from the crisp lines and simple style of the BMW 4 Series, Mercedes C-Class Coupe and Audi A5. For 2019 the car’s trump card has taken on stronger appeal as the RC has had a light facelift, so there’s a slightly reworked front bumper with reshaped headlamps that now contain the L-shaped daytime-running lights. At the rear there’s a different bumper with air ducts carved into it. And yes, you guessed it, new taillights with a more pronounced L-shaped light graphic. 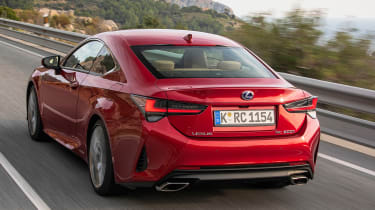 The trim range has also been jiggled around to put the RC in line with the ES, NX and other Lexus models, so there’s an entry-level RC version, a sportier F Sport and a luxurious Takumi model. The £38,800 RC gets 18-inch alloys, adaptive cruise, lane keep assist, automatic high beam and traffic sign recognition, while the £42,300 F Sport gets a mesh grille, adaptive dampers, LED headlights and orange brake calipers. Topping the new range is the Takumi at £45,800 which sees a Mark Levinson stereo and some extra safety kit thrown in - and there are a couple of option packs for RC and F Sport.

Moreover, to show coupes don’t have to be painted in regulation German grey, white or black, the RC gets two new paint shades called Flare Yellow and Sky Blue. They join a colour palette that includes a vibrant pearlescent red and retina-searing pearlescent orange, while for the interior there are eight colour options including new ochre and mustard yellow.

The interior fixtures and fittings and the number of exterior mods may have grown but the same can’t be said for the RC’s engine range. While the hairy-chested 5.0-litre V8 RC F still remains, the entry-level 2.0-litre petrol has disappeared meaning the only regular RC is the 300h hybrid. So the new RC carries over the previous RC’s 178bhp 2.5-litre four-cylinder petrol, 142bhp electric motor and CVT gearbox, albeit with revised WLTP economy and emissions figures. CO2 emissions have jumped a smidge to 114g/km while fuel consumption has been knocked down to between 40.8 and 47.5mpg.

The 300h was always the weakest link in the RC range and with it now being the sole regular version its shortfalls are even more prevalent. While Mercedes, BMW and Audi offer a range of punchy diesels and sonorous petrols, the RC 300h’s petrol-hybrid set-up is underwhelming in comparison. Press the throttle on a twisting piece of country road and the four-cylinder engine’s dull engine note blares, and even sounds coarse towards the redline. Despite the increase in noise, the engine response is sluggish and the fake ‘steps’ in the CVT gearbox to mimic gear changes are unconvincing. The tardy performance is backed up with handling that is numbed down due to the car’s heavy 1.7-tonne kerb weight.

There are some positives though. Lexus has tweaked the steering and suspension so the RC now feels slightly keener to turn into a bend, and both low and high-speed ride feel more polished, but neither of these has turned the 300h into a particularly sporting coupe. However, Lexus was never particularly keen on beating a BMW 420i or any other German coupe with the RC 300h in the first place, and these slight modifications have enhanced the RC’s appealingly relaxed character to the point that it’s now a better car.

Lexus has left the interior well alone and it’s easy to see why. The quality of materials is exemplary and the switchgear clicks and clunks even better than the Germans’ interiors – it’s still a relaxing place to be. It’s just a shame that the awkward and fiddly touchpad controller for the infotainment system remains as it’s an unfortunate blot on an otherwise nearly faultless cabin.