State-of-the-art SUV is now hybrid only. 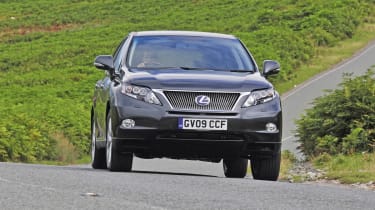 There's no denying that Lexus is one of the leaders of the hybrid scene. It’s hard not to be impressed by the V6 RX 450h’s claimed fueleconomy of 44.8mpg and sub-150g/km CO2 figures. But all is not as it seems... We managed only 28mpg and were left cold by its dull dynamics. If only Lexus had worked as hard on the packaging as it did with the impressive powerplant.

All the benefits of an SUV, without the horrendous fuel consumption! Lexus claims its RX 450h hybrid 4WD is the future of family motoring, but can the driving experience live up to the cutting-edge internal technology?

The RX is now only available as a hybrid. That means a 3.5-litre V6 petrol engine works together with two electric motors to churn out a combined 295bhp – 10 per cent more than before. At the same time, Lexus has managed to cut CO2 emissions and fuel consumption, by 23 and 28 per cent respectively.

You can feel the extra power instantly. Floor the throttle and there’s strong performance on tap. The problems only begin when you tackle a corner. Lexus says the suspension set-up has been specifically tuned for European roads – which means you’ll have to put up with stiff dampers. And that’s not all. There’s understeer on wet roads, torque steer and body roll, too.

Climb aboard and you’ll find a well appointed interior. The new joystick-style control for the sat-nav is brilliantly intuitive and the Mark Levinson stereo really is something to behold.

It’s a shame that such a technical tour-de-force is let down by an underwhelming driving experience.