If your next £50,00 sports car has to be British, then the Marcos TSO is well worth considering. 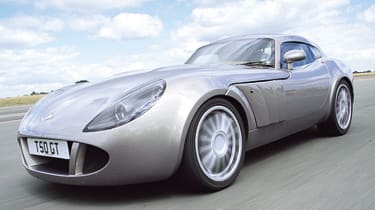 Driving: Under the bonnet lurks a tuned 475bhp 5.7-litre V8 mated to a slick-shifting six-speed gearbox - basically the same powertrain that appeared in the previous-generation Corvette. A well-proven engine, it roars noisily into life, but at idle feels more refined than, say, the restless straight-six in TVR's Safaris. Still, it lacks none of that unit's edge when you touch the throttle. With such a big powerplant in a car weighing only 1,150kg, performance is immense. Yet despite its huge potential, the Marcos is surprisingly docile if driven gently. Supple suspension soaks up the worst of pot-holed roads and overall it feels quite refined. The brakes are sharp and reduce the speed quickly, although the pedal feel is a little soft. The steering is not over-sensitive, and proves accurate and well weighted. Rather unusually, the company boss had Mazda's MX-6 as a handling benchmark - despite that, it has not undermined the set-up.

Marketplace: Marcos is back, with a new owner, fresh hope and a great-looking car. Based on a spaceframe chassis, the TSO's body is still fibreglass, yet the neat finish is at odds with the rough Marcos' of old. Adding to the kudos, Marcos is able to boast the help of tuning firm Prodrive in developing the TSO. View this car not as the agricultural creations of old, but as a more subtle alternative to a TVR. The £50k coupe, also available as a soft-top (the R/T), is pitched against the cream of German sports opposition too, as well as British rivals such as the Lotus Exige and Caterham CSR.

Owning: Neat leather and aluminium trim inside is a far cry from past cars. Even rarely seen details such as the boot hinges are given an architectural feel - it all adds to the sense of depth in quality. However, the cockpit itself is quite small, and getting in is far from easy, thanks to the wide door sills and deep bucket seats. But it is worth the effort because once settled, the chairs provide a snug environment. The TVR-style instruments look great, enhanced by LEDs that light up when air-con and vent buttons are pressed. It is rather expensive though, and not particularly well equipped, either; air conditioning is not even included as standard. Sales predictions are models, at around 65 cars per year, but early signs are promising: demand has already created a waiting list.