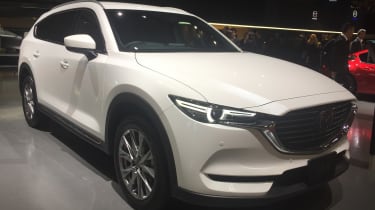 The new Mazda CX-8 has been revealed in full at the 2017 Tokyo Motor Show. The crossover was first announced in July, but makes its public debut this week – ahead of a full launch next year.

Initially only available in Japan, the CX-8 features an innovative seven-seat setup, with three different configurations for the second row of seats.

In six-seat mode, the two middle seats can be positioned to utilise a centre console box. The two captain’s chairs can also be fitted with adjustable armrests, while removing the storage box creates a centre walk-through – allowing easy access between the second and third rows. A seven-seat variant is also an option on the CX-8 crossover, while all five rear seats can fold flat to create additional space for carrying heavy or bulky loads. 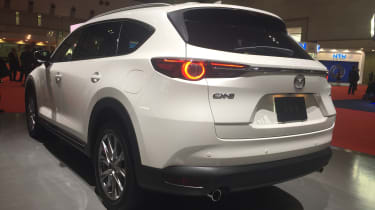 The CX-8 is powered by Mazda’s 2.2-litre SkyActiv diesel engine that produces 188bhp and 450Nm of torque. A six-speed automatic transmission is also fitted along with a new four-wheel-drive system.

Safety is a key consideration on the Japanese-exclusive CX-8. All trim levels are equipped with Mazda’s i-ACTIVSENSE advanced safety technology, which adds semi-autonomous driving capabilities. A 360-degree monitor is also fitted to aid parking, working in tandem with rear parking sensors.

Are you hoping the Mazda CX-8 makes it to the UK? Let us know in the comments.