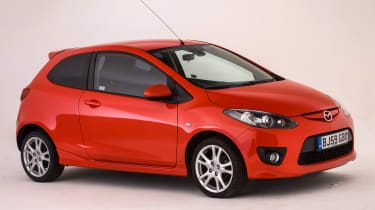 Whether you’re looking at buying your first car, something for the school run or just an everyday runabout, the Mazda 2 fits the bill. When we ran a 1.6-litre diesel model on our fleet for a year, we quickly warmed to its great handling and smart looks. It proved to be completely dependable, too. Plus, the baby Mazda turned out to be a lot more practical than we expected, even for things like house moves, thanks to its excellent packaging. And one of our testers went so far as to compare the 2’s agility with that of the MX-5 – that’s how good it is to drive. Throw in refinement, comfort and low running costs, plus keen prices, and you’ve got a very impressive supermini indeed.

Mazda is neither a volume car maker nor a premium one, which is why it’s often overlooked by new and used buyers. Yet the Japanese company has built a raft of great models over the past decade that look sharp, drive brilliantly, are reliable and have a decent amount of equipment.

That’s the case for the Mazda 2, which went on sale in second-generation form in 2007, and was only replaced last year. It was good enough to win the World Car of the Year award, which is why it’s baffling that it’s often ignored by car buyers.

The Mazda 2 is now in its third generation, but we’re focusing on its predecessor in this review. The Mk2 hit showrooms in 2007 and was on sale for seven years, with a facelift coming in 2010, before being replaced in 2014. 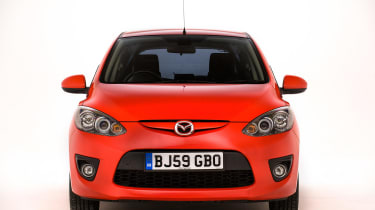 The Mazda 2 Mk2 arrived in the UK in September 2007, in 1.3 TS, 1.3 TS2 and 1.5 Sport forms. Initially, there was a five-door hatchback only, but a three-door version appeared in May 2008 featuring the same engine and trim options.

In November 2010 a revised 2 arrived with a new nose, more efficient engines, a better dash and the option of an automatic gearbox. Another special appeared in February 2013: the 1.3 Venture with rear parking sensors and sportier styling.

Mazda tends to keep its range of engines and trims pretty simple. If you want lots of kit you have to go for the 1.5-litre engine, while if you’re happy to have a more basic Mazda 2 you’ll have to specify the 1.3-litre engine – although there was a stream of high-spec limited-edition 1.3-litre models. 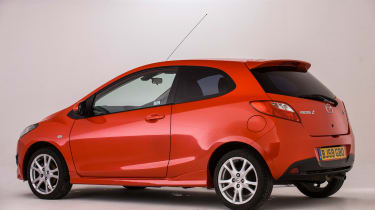 It’s worth going for the TS2 because it comes with standard air-con, side and curtain airbags, a multifunction steering wheel, four-speaker hi-fi plus alloy wheels and potentially life-saving ESP.

Alternatives to the Mazda 2 Mk2

Top for driving fun is the Ford Fiesta. It’s also cheap, reliable, practical, and there’s a huge array of models to choose from.

Even more practical and reliable is the five-door-only Honda Jazz. However, it has no diesel option and is more expensive to buy than most of its mainstream rivals. 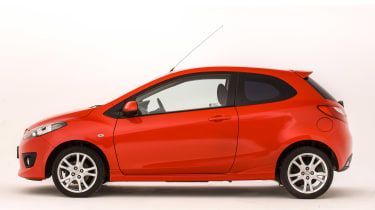 For a posh supermini, the Audi A1 and MINI hatch are great choices, but both are more pricey, and be aware that a five-door version of the latter has only recently arrived, so you’ll have to settle for a three-door if you want one at a similar cost to the Mazda.

The Skoda Fabia and Toyota Yaris are both dependable and cheap to run, while the Peugeot 207 and Renault Clio are both strong value and in plentiful supply.

The security system can be temperamental on occasion, so lock the car and walk around it a few times to see if the alarm goes off when you’re near it. 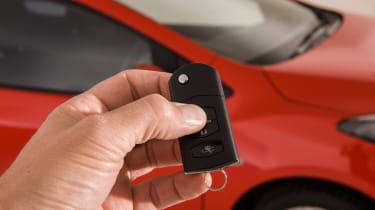 Rear wheel bearings can be weak, so listen for a chattering noise. If it gets louder as you go round a right-hand corner it’s the left-rear bearing, and vice-versa on left-handers.

The clutch pedal can make some annoying clicking noises when it’s pressed down. Unfortunately, Mazda says that this is a characteristic of the car, with no known remedy. 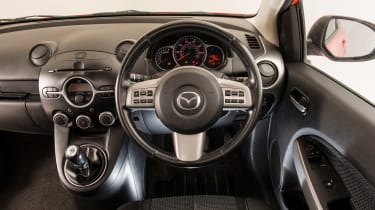 The Mazda doesn’t feel especially cheap inside. Clearly laid out and with a decent amount of head and legroom, the interior will accommodate three kids in the back, or two adults. Boot space is poor, though, at 250 litres, while the high loading lip doesn’t help when it comes to accessibility.

The Mazda 2 needs a service every 12 months or 12,500 miles, with typical costs ranging between £140 and £260 at a dealer. The petrol engine is chain-driven, so there’s no need for a replacement cambelt, although the 1.4-litre diesel is fitted with a belt that must be replaced every 10 years or 125,000 miles. Expect to pay around £300 to have this done. As well as this, the brake fluid needs to be replaced every two years at a cost of £88.

Fresh coolant is required every 10 years at £160 or so, while the air-conditioning should be checked at each service. There’s no set schedule for recharging it, but if needed you should expect to pay around £50. 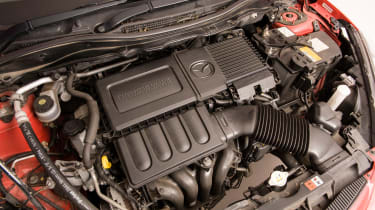 Mazda builds some of the most reliable cars on the road, so it comes as no surprise that even eight years after it first went on sale, the 2 has yet to be recalled.

Indeed, since the second-generation model arrived in 2007, the company has issued just 11 recalls across its entire model range. That’s pretty good going when you consider that some rivals have launched that many recalls for a single model over this period of time.

The Mazda 2 Mk2 didn’t rank in our 2016 Driver Power customer satisfaction survey, but it did finish a disappointing 161st in 2015. It managed just one top-100 score – 58th for reliability – and was ranked 103rd for handling and 111th for running costs. Low points were 186th for seat comfort and 169th for performance, plus 165th for in-car tech.