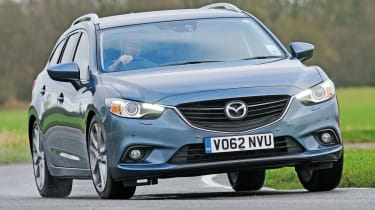 The Mazda 6 Tourer is a traditional family car, but while it follows a tried-and-tested concept, its list of talents is formidable. It looks fantastic on the outside and it’s well equipped, spacious and comfortable on the inside. While it’s economical and well priced, its driving experience will keep keen drivers happy on a twisty B-road, too. We can think of few rivals with such a broad repertoire of talents.

Not so long ago, Ford Mondeo-sized cars ruled the roost for family buyers, but times are changing. Crossovers such as the Mazda CX-5 are tempting customers away from more traditional bodyshapes, so a car must be good to succeed in this market. Can the new Mazda 6 Tourer make the grade on UK roads?

First impressions are fantastic – the Mazda is a real looker in saloon or Tourer estate form, with its aggressive, upright grille that leans forward BMW-style, flanked by swept-back headlights. The feature chrome strip that runs under the grille and into the lights looks classy, too.

Sculpted flanks and a glass area which tapers towards the rear end give the car a sporty stance, as do the smart 19-inch wheels that are standard kit on our Sport model. Twin exhausts and smart LED tail-lights round off what has to be one of the sharpest-looking estates on sale.

Our car was equipped with Mazda’s impressive 2.0-litre SkyActiv petrol engine, which gets stop-start and the option of a new capacitor-based brake regeneration system called i-ELOOP. It also has an almost diesel-level compression ratio of 14:1, which helps deliver very impressive economy of 47.9mpg.

Yet this superb efficiency doesn’t compromise the car’s performance. Helped by a slick six-speed manual box, the engine is very smooth. It also pulls like a diesel from low revs, but continues to offer fine petrol-style response at higher revs where a diesel would run out of puff.

The brakes are strong, while the steering is nicely weighted and direct, making the 6 Tourer feel much smaller and lighter than it actually is. The Mazda is a comfortable cruiser, too, although wind and road noise are a little louder than in a Volkswagen Passat.

Inside, there’s plenty of adjustment for the driver’s seat and wheel, making a decent position easy to find. Rear space is good, too, with passengers benefiting from air vents in the centre console and cup-holders in the drop-down armrest.

Useful handles in the boot allow the rear seats to drop fully flat instantly, giving 1,632 litres of luggage space. However, the rear wheelarches do intrude a bit, which means the boot is smaller than the Mondeo estate’s 1,740 litres.

The interior design is backed up by soft-touch plastics, which contrast nicely with the classy gloss black and metal detailing. The iDrive-style dial in the centre console for adjusting audio and sat-nav settings has nice, chunky buttons which feel satisfyingly solid to press. Unfortunately, the cabin isn’t perfect. The doors feel rather tinny and the mixed fonts on the dials jar. The built-in TomTom sat-nav disappoints, too: it works well, but looks and feels too much like a cheaper aftermarket system, rather than a fully integrated manufacturer unit.