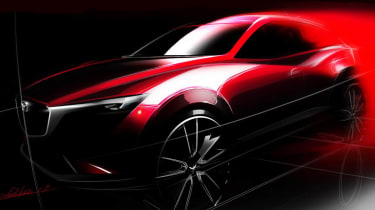 Mazda has given us our first peek at the new CX-3 SUV ahead of its debut at the LA Motor Show on November 19, with this official design sketch. And Mazda is so confident you'll like the CX-3 that it’s skipped the concept phase and will jump straight to showing the full production model.

The CX-3 is the latest model in a recent product onslaught from Mazda, that includes the new Mazda2 supermini and the new MX-5 – both on sale in early 2015. Although the CX-3 is yet to be fully revealed it will tow the company line and use the same ‘Kodo’ design language as its bigger brother, the CX-5.

A three-dimensional, shield-shaped front grille links up neatly with the headlights, while a pair of bulging wheel arches form a wave-like line down the side of the car. From the sketch you can also see how the CX-3’s roofline drops away quicker than the CX-5, outlining a sportier profile.

According to Mazda’s short official release, “the essence of Kodo – the expression of life within a vehicle – has been evolved to produce a sharper form with an enhanced sense of speed.” It also claims the CX-3 will feature “the full range of SKYACTIV technology,”

Expect the CX-3 engine range, therefore, to mirror the Mazda 2 it’s based on with a 1.5 SKYACTIV-G petrol engine producing up to 113bhp, and a 104bhp 1.5 SKYACTIV-D diesel engine.

Also confirmed on Mazda’s stand at the LA show are facelifted versions of the Mazda 6 and Mazda CX-5, along with a new 2.5 SKYACTIV-G petrol engine rumoured to be capable of producing up to 300bhp and a candidate for powering a hot Mazda 3 MPS in the near future.