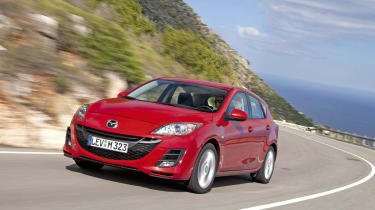 There wasn’t much wrong with the old 1.6-litre diesel engine, but now it’s quieter and more efficient than ever. One of the biggest changes comes courtesy of a sixth gear ratio, which greatly reduces revs at motorway speeds and adds relaxing cruising to the Mazda’s already impressive list of abilities. If you’re looking for an extremely capable alternative to the usual family hatchbacks, you can’t go far wrong with the 3.

Three is the magic number for Mazda – or is it five? The 1.6-litre diesel engine fitted to the Japanese firm’s hatchback has been upgraded to deliver more power and efficiency, plus comply with Euro V regulations on emissions. We took to the roads to see if it improves the driving experience, too.
What’s immediately apparent is that the engine is smoother than the outgoing powerplant, so start-up and everyday driving are quieter. You only really become aware it’s a diesel when you accelerate hard at low speeds. A problem with the previous unit was noise intrusion in the cabin when on the motorway, but thanks to a new six-speed manual gearbox, the 3 is now a much more relaxing high-speed companion.

Video: watch CarBuyer's video review of the Mazda 3
[[{"type":"media","view_mode":"content_narrow","fid":"68428","attributes":{"alt":"","class":"media-image"}}]]
Power delivery is also more progressive, and its uprated 115bhp comes 400rpm earlier in the rev range. Torque is also up by 30Nm to 270Nm, spread over a broader rev band. It all adds up to a very punchy unit, but there’s no real surge of power when the turbocharger kicks in. Whether that’s a good thing or not is a matter of personal preference. But what’s clear is that, despite an unchanged 0-62mph time of 11 seconds, the new powerplant means that the 3 feels noticeably quicker during everyday driving.
Fuel economy has been boosted to 64.2mpg and CO2 emissions now stand at 117g/km – improvements of 1.4mpg and 2g/km respectively.
We’ve always liked the way that the 3 handles, and this model is no different. On the winding road of our test route, it was agile and responsive thanks to its direct steering – although we’d have preferred a bit more weight to it.
Body roll is well controlled compared to other cars in this class but, as a result, the ride isn’t as comfortable as it could be.
The Mazda’s biggest selling point, however, is its price tag. Models fitted with this engine start at £16,605, and very few extras are needed.
In range-topping TS2 trim, our test car cost £18,405, and came fitted with a heated front windscreen, cruise control, 16-inch alloys and dual-zone air-conditioning. This generous package of equipment, allied to a smoother, greener and punchier diesel, ensures the latest 3 is a great addition to the range.

The Honda provides sharp handling, refinement and a bold cabin in a practical package. There’s not a truly economical diesel offering, however, with the closest being a 2.2-litre unit that delivers 47.9mpg and CO2 emissions of 135g/km.
Share this on TwitterShare this on FacebookEmail