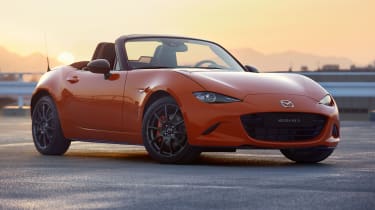 The new Mazda MX-5 30th Anniversary Edition has gone on sale in the UK, with prices starting from £28,095 for the latest limited number version of the firm's popular sports car.

The UK, one of the world’s biggest MX-5 markets, will receive 550 cars of the 3,000 global allocation. 370 will be soft top convertibles and, with 180 hard-top RF models. Distinguishable by its black, dual-tone roof, the retractable Fastback ‘RF’ is priced from £29,895. First deliveries of both versions will take place this summer.

Inside, this limited edition MX-5 gets orange accents and Alcantara swathing around the cabin, dashboard and gear stick, Recaro seats, a nine-speaker Bose sound system and support for Apple CarPlay and Android Auto as standard.

Revealed earlier in the year at the Chicago Auto Show, this new model’s debut follows in the footsteps of the original MX-5, which was also revealed at the Chicago expo in 1989. Since launch, the MX-5 has sold more than one million units worldwide, over 130,000 of which have found UK homes.

Now read our review of the standard Mazda MX-5. Let us know your thoughts in the comments section below…

The popular Mazda MX-5 has been updated for 2020, but with the changes comes a jump in price
Visit Limited edition Mazda MX-5 100th Anniversary launched 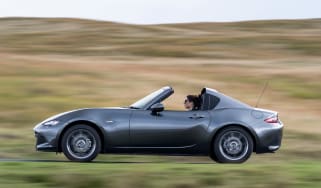