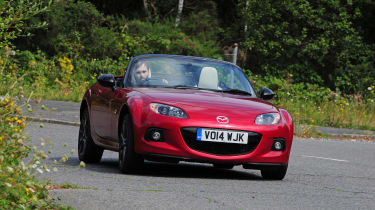 Brisk, agile and excellent value, this MX-5 is everything you could ever ask of a two-seat sports car, without the stiff and unforgiving ride. The accessible performance lets you unlock the car’s full potential, and the 25th Anniversary Limited Edition was a fitting way for the MkIII to bow out. With the added exclusivity and style, no wonder it sold out fast.

The world’s best selling two-seat sports car reached its 25th birthday in 2014, and with an all-new, fourth-generation Mazda MX-5 on the horizon, Mazda celebrated the occasion with a limited-run version.

Appropriately named the 25th Anniversary Limited Edition, this last hurrah for the third-generation MX-5 was restricted to a production run of just 1,000 models.

Yet Britain’s perpetual love affair with open-top roadsters means Mazda allocated 750 of these cars to UK customers. The company used the current range-topping 2.0-litre Sport Tech Nav model as a base for the Anniversary Limited Edition, but added a whole host of extra equipment and some eye-catching design tweaks. 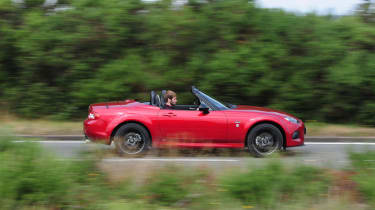 Every model was finished in Soul Red metallic paint, offset by the black door mirrors, A-pillars and power-folding hard-top, while new 17-inch alloys, a rear diffuser and chrome-tipped exhaust pipes rounded off the exterior look.

Let’s not forget this generation of MX-5 was nine years old in 2014, so the interior was beginning to look a little rough around the edges. Still, Mazda injected some life into things, trimming the cabin in a light stone leather, with contrasting red stitching on the seats, steering wheel, gearlever and handbrake. In keeping with the colour scheme, a hand-painted dark red dashboard decoration panel was fitted, as well as a headrest embossed in the 25th Anniversary logo. Built into the new-look dash and specific to the Limited Edition is a 6.1-inch Alpine touchscreen navigation system, featuring Bluetooth, USB connectivity and a DVD player. It’s responsive, although it does have an aftermarket look, while the interface isn’t the most user-friendly, either.

All the changes to the Anniversary model were purely cosmetic, meaning there are no mechanical adjustments to mention. Mazda was saving its latest SkyActiv chassis and engine technology for the all-new model, which arrived a year later, but in the meantime the company stuck with its tried and tested 158bhp 2.0-litre engine and six-speed manual gearbox.

Cynics have often criticised the MX-5 for being underpowered, but they’re nit picking at an otherwise well honed product. As with every example of the roadster, this model remains naturally aspirated, so if you want to access all 158bhp you really have to work it, but that’s no bad thing. The engine spins all the way up to 7,000rpm, and it’s here that you’ll get access to all of the grunt, accompanied by a raspy exhaust note. 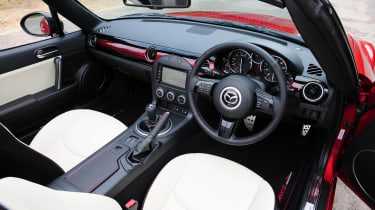 The car never feels lightening quick, although a 7.9-second 0-62mph sprint time is still fairly brisk. Then again, the MX-5 has never been about outright pace. The stubby gearlever slides crisply between the six ratios, while the beautifully precise steering lets you make use of the car’s agile set-up.

There are a few refinement issues – with the roof in place, wind noise isn’t very well contained, and at motorway speeds the interior can become rather noisy. Having said that, for a two-seat sports car, the standard Bilstein dampers give a surprisingly supple ride without turning the Mazda into a wallowing mess when you arrive at a corner.

And the good news keeps on coming. Despite the added extras inside and out, the Anniversary Edition worked out £300 cheaper than the current top-spec MX-5.