Nothing is as you would expect with Mazda's stunning new RX-8. It looks expensive, but it's not. 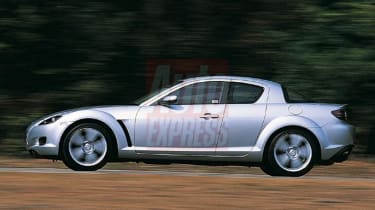 The RX-8 has got the lot - great handling, a smooth engine and a truly striking shape. Go for either version and you won't be disappointed - both are excellent value for money. The slower car's extra torque makes town driving easier, but weaker performance will leave some buyers wanting more.

Nothing is as you would expect with Mazda's stunning new RX-8. It looks expensive, but it's not. On the road, it feels mid-engined, but its innovative motor is stuck up front. The smooth power delivery suggests there's a potent V6 under the bonnet, but there isn't.

In fact, the entry-level machine that Auto Express is driving here for the first time makes do with a 189bhp 1.3-litre RENESIS rotary engine - that's 39bhp down on the flagship 228bhp version. On paper, the differences between the two are predictable. The lower-powered RX-8 reaches 62mph from a standstill in 7.2 seconds, trailing the more potent variant by 0.8 seconds, while the maximum speed is 139mph, 7mph less.

Thankfully, in everyday driving the drop in performance is less noticeable - and it's all down to torque. In a quirk of the rotary engine, the 189bhp car produces 220Nm, while the 228bhp RX-8 offers only 211Nm at a lofty 5,500rpm. With the cheaper version, 80 per cent of the total pulling power is available at a mere 2,500rpm, making town driving much less of a chore. That said, acceleration tails off after the peak torque has been delivered, but most people will still find in-gear performance impressive. Unfortunately, drivers of this variant have to make do with only five gears instead of the more versatile six ratios of the flagship RX-8, but the car's superb handling balance remains unaffected.

So has Mazda managed to turn the RX-8 range on its head? Well, that depends on what your priorities are. For the ultimate performance thrill, the higher-powered version is well worth its £2,000 premium. However, if you value additional low-down torque, then go for the entry-level model and pocket savings right across the board.