Revamped coupe is now even sharper to drive 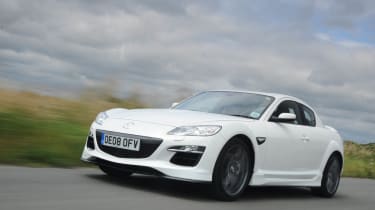 THE days of the RX-8’s rotary engine are numbered – in petrol form at least – because of its thirst. Yet the addictive howl of the revvy powerplant coupled with the seriously engaging driving dynamics mean that the R3 boasts a character which transcends the sum of its intelligently revised parts. It’s great value to buy, but it’ll cost you at the pump.

It’s the most outrageous evolution of Mazda’s RX-8 to date. But even so, the R3 is more of a special edition than the full-on facelifted model Mazda claims it to be.

The good news is that the car looks as fresh today as it did when it was launched in 2004. The only optional extras are its six different paint colours, so for £24,995 the R3 comes with luxuries including lightweight Recaro sports seats and fully automatic climate control.

On the outside, all R3s get a sports bodykit, with an aggressively styled front bumper and menacing xenon lights. Each flank gains an attractive side skirt, better designed LED side indicators and intricate titanium grey 19-inch wheels.

The most striking changes are at the rear. A new bumper has a more sculpted appearance than before, while the rear lights gain LEDs and the bootlid is graced by a small spoiler.

But the Mazda’s key selling point – its 228bhp 1.3-litre rotary engine – has received minimal attention. It’s the detailed revisions to the transmission, brakes and suspension which make for the most significant improvements.

The steering has extra precision, thanks to a quicker steering rack, while the ride on poor surfaces is helped by new settings for the dampers, springs and suspension bushings inspired by the Prodrive-engineered PZ special edition.

The gearbox has also improved, and ratios have been shortened to make up for the engine’s lack of torque. Along with the superior dynamics, it all adds up to make the R3 the most desirable RX-8 ever.