Sharp driving dynamics and a distinctive rotary engine, the quirky Mazda RX-8 has always been one of our favourite coupes. 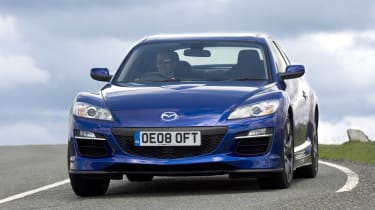 When it was revealed in 2003, the RX-8 created quite a stir. Thanks to its novel ‘suicide’ rear doors the rakish coupe stole a practical march on more conventional rivals. The latest version retains this neat layout, while subtle tweaks to the shark-like nose freshen the car’s distinctive looks. Entry-level versions get either a 189 or 228bhp version of the high-revving 1.3-litre Wankel rotary engine. The range-topping R3 adds sports suspension and bodykit.

Given its sleek coupe profile, there’s a surprising amount of cabin space available in the Mazda. It’s a strict four-seater, but all occupants get decent head and legroom. Only the lack of luggage capacity is a problem, which is exaggerated by the narrow tailgate opening. All models get climate control, a Bose hi-fi and a limited slip differential. Pick the R3 and leather trimmed Recaro seats and xenon headlamps join the list of standard kit.

It’s not just on the outside that the Mazda is unconventional. Take a look under the bonnet and you’ll find the firm’s trademark Wankel rotary engine. Even in entry-level form this smooth-spinning 1.3-litre unit delivers 189bhp. Pay a little extra and you get 228bhp and a standard six-speed gearbox. Both engines suffer from poor low rev torque, although the higher power version will sprint from zero to 60mph in 6.4 seconds. However, owners need to keep a keen eye on oil consumption.

There are few cars in this class that are as entertaining to drive as the Mazda. A traditional rear-wheel drive chassis, near perfect weight distribution and direct steering combine to make the RX-8 a delight on twisting back roads. The range-topping R3 gets Bilstein sports suspension, which sharpens the handling still further. Decent refinement and a firm but well controlled ride mean the Japanese coupe is also a comfortable long distance cruiser.

For the price, few cars serve up as much performance, style and driving fun as the Mazda. However, look past the low list price and you’ll find surprisingly high running costs. Even the lower power car struggles to return 27mpg, while CO2 emissions of 267g/km result in a £400 annual tax bill. Worse still are the RX-8’s residuals, with all models retaining just 30 percent of their value after three years.

The RX-8 has escaped EuroNCAP testing, but it does feature six airbags, electronic stability control and traction control as standard. Both rear seats get ISOFIX fittings, making the Mazda a genuine proposition for the family buyer. Sadly, the coupe’s eco-friendly credentials are less impressive. The 227bhp model emits a staggeringly high 284g/km of CO2 – the 189bhp car is little better at 267g/km. Both versions are thirsty at the pump, with around 27mpg the absolute best you can hope for.