You have to hand it to Mazda. Many people doubted whether the company would have the bottle to press ahead with the RX-EVOLV concept 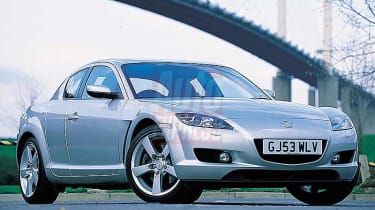 You have to hand it to Mazda. When it took the wraps off the RX-EVOLV - the concept version of the RX-8 - four years ago, many people doubted whether the company would have the bottle to press ahead. With its pillarless body and rotary engine, the newcomer was adventurous for a concept, let alone a showroom model. But the finished article is bustling with all the features that made the concept so appealing. In a world where virtually every new car is based on another's platform and shares an engine with 50 other models, the RX-8 is a blast of fresh air. The Mazda impressed instantly with its sharp steering and great chassis, but what really made it stand out was its all-round usability. Faced with moving flat just after Christmas, the prospect of multiple journeys through London filled me with dread. However, I was amazed not only at how much kit the RX-8 could swallow, but also how easy it was to load. One trip involved a passenger, a television, a vacuum cleaner and three cases. Try doing that in a Toyota Celica or Alfa GTV. But despite the unexpected practical appeal, it's the performance that generates the most smiles. The rotary engine has loosened up as the mileage has risen, and the Mazda has blown away the post-Christmas blues. While it lacks low-down torque, the unit's smooth nature means power builds from 3,000rpm, and it's a pleasure to rev it up to the 9,000rpm red line. What's more, although the unique rotary noise has divided opinion in the office - some colleagues have compared it to a washing machine on spin - I love the high-pitched wail. With a spot-on driving position and supportive seats, combined with a slick gearshift and positive brakes, there's little to complain about. And everyone who's been in the RX-8 has praised the interior, especially the £1,500 optional leather seats. So what about niggles? Well, the lack of a rear wiper means backward visibility is poor on dark and wet evenings, and some find the handbrake gets in the way of the gearstick. There are compromises with the rotary power, too. Firstly, there's a fairly healthy consumption of oil - just over three litres already. Synthetic lube isn't cheap, either, but the biggest annoyance is the location of the dipstick. Unfortunately for a vehicle that needs its levels checking regularly, finding the Mazda's dipstick involves reaching into the depths of the engine bay. Not only does this mean scratching your knuckles, but extracting the dipstick without brushing it against things on the way up is also a challenge. All of which means getting an accurate idea of the oil level is a long-winded process and, should you need a top up, the plastic engine cover has to be removed to gain access to the filler cap. But the biggest drawback to RX-8 ownership comes at the fuel pump, as the high heat loss in rotary engines means poor economy. And that's certainly been the case with our car, with a heavy average consumption of 18.8mpg. Yet despite the bills and the oil hassle, this Mazda is in demand. As the saying goes, no pain, no gain.