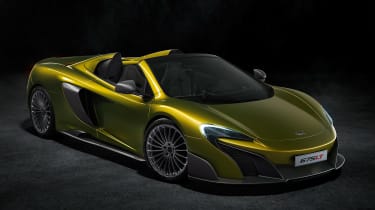 McLaren has broken out the can-opener to create this, the convertible 675LT Spider. It's the second car this year to bear the Longtail (LT) name this year after the coupe version was revealed at the Geneva Motor Show in March. Both cars share a name, and a design ethos, with the Le Mans-winning F1 GTR Longtail from 1997.

The 675LT Spider will be limited to just 500 units around the world, so you'll need to get your order in quick. Just make sure you've got enough spare change in your pocket as it will set you back £285,450, a £25,950 premium over the coupe. First deliveries start in summer 2016.

Of course the key addition for this 675LT is the folding hard-top roof. It can be opened at speeds of up to 19mph behind a tonneau cover, with the engine still visible through the clear cover. Like on the 650S Spider, opening the top exposes two humps behind the driver and passenger, a subtle nod to McLaren's F1 heritage. 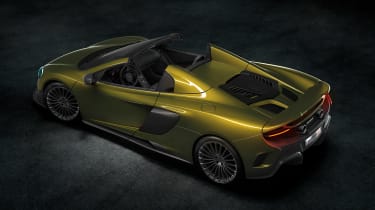 The rest of the design doesn't stray far from the coupe version, with the same large side air intakes, aggressive front splitter and the long tail at the back referenced in the car's name. The rounded twin exhaust pipes at the back remain, too. There's an extra paint option exclusive to the Spider, called Solis - it's a deep golden colour.

Lightweight alloy wheels are fitted with special Pirelli Trofeo R track tyres. A set of 10-spoke alloys are standard, but you can choose a new 20-spoke type, or pick the same five-spoke wheels already available on the coupe.

Like the hard-top LT, the Spider gets a 3.8-litre twin-turbo V8 with 666bhp and 700Nm of torque. You might expect the convertible to weight a lot more than the coupe, but thanks to the carbon fibre construction just 40kg has been added by the roof mechanism - so performance is nearly identical.

The Spider goes from 0-62mph in 2.9 seconds, and on to a top speed of 203mph - that's 2mph down on the coupe. That's down to the extra weight and some aerodynamic differences between the two cars, which also add 0.2 seconds to the 0-124mph time, which is 8.1 seconds. 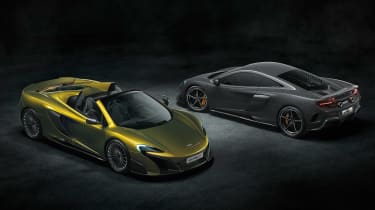 Compared to the 650S Spider the 675LT gets a 20mm wider track, stiffer springs and is 100kg lighter. The aerodynamic changes like the front splitter and long tail at the back aren't just for show, either, as there's 40 per cent more downforce.

Saving weight has mainly been achieved by rebuilding the body with carbon fibre rather than aluminium, and adding a lightweight titanium exhaust. The interior is stripped back as well, with thin racing seats based on those from the P1 hypercar. It still features a large central touchscreen and a stereo system, but the air-conditioning is removed as standard. It's a no-cost option to get it back, but it does add 16kg to the car.

What do you think of the ever-expanding McLaren range? Let us know below...