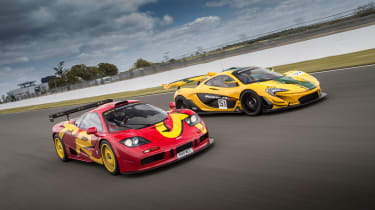 It remains one of the most unexpected victories in front-line motorsport. The race was the 1995 Le Mans 24 Hours, and the car that won was the mighty McLaren F1 GTR, much like the red and yellow car you see here. The reason the McLaren’s victory came as such a huge surprise to everyone was that it won on its debut at the race. No car in the modern era of racing had ever done that before.

Scroll forwards 20 years and, although McLaren has no plans to return to Le Mans any time soon, it has finally produced a successor to the F1 GTR in the form of the P1 GTR. To celebrate, we drove both cars back to back on one unforgettable morning at Silverstone.

The P1 GTR is not a full racing car, unlike its forebear. Instead, think of it as the ultimate track day machine, created by McLaren to satisfy the desires of its most exclusive customers. You can’t buy one unless you already own a regular P1, and you will never be able to drive your GTR on the road because, unlike the F1 GTR you see here, owned by Pink Floyd drummer Nick Mason, the P1 GTR will never be road legal. 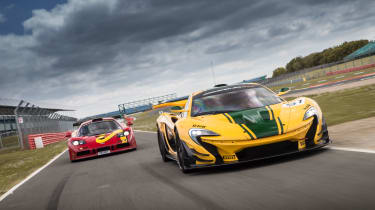 But your £1.98m doesn’t just buy a mere motor car – it buys into the world’s most exclusive driver-training program. Each P1 GTR comes with a small team of engineers to help you fettle and understand the car, plus an ace McLaren driver to teach you how to drive it at a series of venues such as Silverstone, Abu Dhabi, Bahrain, Spa in Belgium and the Circuit of the Americas in Texas.

In total only 45 P1 GTRs will ever be made, and for your near-£2m you get the full track day and driver-training program, plus a fitness regime to go with it, for 18 months. Plus, of course, the small matter of a P1 GTR is included. During that time it’s up to you whether you take your P1 GTR away, store it in your garage and transport it to the various circuits. McLaren will take care of the car and transportation for you. The company says that, so far, about 50 per cent of P1 GTR customers have chosen to look after their cars themselves.

• McLaren 675LT ride review: on track in the new 'longtail'

Were it my P1 GTR, I’d want it tucked up in my own garage so I could gawp at it in the middle of the night. But it’s what lies beneath the dramatic carbon fibre skin that matters most. The basic engine and hybrid system is the same as that of the regular P1, so there’s a 3.8-litre twin-turbo V8 mated to a dual-clutch seven-speed gearbox with a carbon fibre tub. The GTR is rear-wheel drive and its rear wing is fixed to provide maximum downforce at all times. 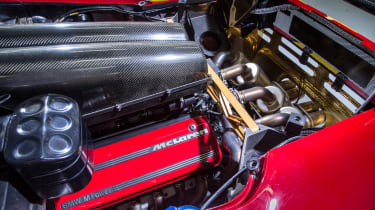 Power from the twin-turbo hybrid V8 is 986bhp with torque rated at 1,000Nm. The GTR also weighs a fair bit less than the regular P1, despite featuring a hydraulic jacking system so the wheels can be changed in a jiffy. Its slick Pirelli rear tyres have been exhaustively tested so they don’t melt beneath all that torque. But there’s also ABS and an adjustable traction control system because, says the GTR’s chief development driver Chris Goodwin: “We didn’t want to make a car that was going to be difficult or intimidating to drive. We wanted to make a car that’s really fast, of course, but also one that our owners can enjoy, no matter where their skill levels are at. And then, hopefully, over the program they will get better, and learn to enjoy the car even more as the process evolves.”

The F1 GTR, on the other hand, isn’t quite so cuddly. Its atmospheric 6.1-litre V12 produces 620 of the loudest, most rampant horsepower you will ever encounter. Its steering and brakes have no power assistance, and its six-speed gearbox features a conventional H pattern shift, while its clutch pedal requires a mighty shove just to move.

On track in the McLaren F1 GTR

I drive the F1 GTR first because, when I arrive, Bruno Senna is in the P1 GTR, and doesn’t look like getting out any time soon. Before I climb aboard the F1, hands oscillating slightly with nerves, engineers fire it up and begin the process of warming its complex gizzards. This takes a good five minutes, during which time I stare at what is surely one of the most gorgeous-looking race cars ever built.

Once I’m inside, the F1’s central driving position feels instantly natural, immediately perfect. As the numbers in its surprisingly simple digital dashboard indicate that the gearbox oil has come up to temperature, I snick the right-mounted gearlever up into first and gradually release the carbon clutch – no throttle required. 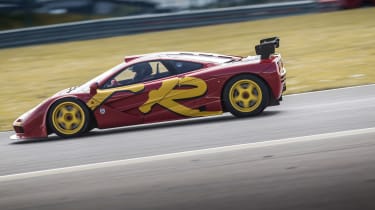 And, ever so slowly, the F1 GTR starts to move. It feels and sounds rabidly alive as I drive out of the pitlane and on to the circuit. The ride is firm but not ludicrously so, the steering heavy but precise, the gearchange instant, the brake pedal firm but bubbling with feel under foot. But it’s the throttle response that blows me away the most. It is nothing short of incredible how violently the F1 GTR accelerates when I prod its accelerator in any of the first five gears. The sense of energy being unleashed is total, the noise that accompanies my progress magnificently deafening, even with a crash helmet on.

The way this car eats the main Hangar Straight at Silverstone is as shocking as it is hilarious the first time I let rip in it, and the way it stops for and then turns into Stowe corner at the end of the straight is similarly astonishing. The experience of simply driving the F1 GTR on a circuit, albeit not that fast, is intimidating, exhilarating, uplifting and downright terrifying, all at the same time.

I do four laps in the F1 and then come back in. During those laps I get nowhere near what this incredible car – which, by the way, is valued at around £20m – can do. But it’s enough to make me realise what a complete and utter weapon it must have been 20 years ago, and which it still is even today. The speed it can generate in a straight line is outrageous, even by crazy modern standards, but it also feels glued in the corners, too, which I wasn’t expecting.

Although the driving position of the P1 GTR is much more conventional than the F1’s – you sit on the left because all P1s are left-hand drive – its cabin feels more complex. Most key buttons have been transferred to the steering wheel for ease of use, but it’s still an intimidating machine to climb aboard, with huge side pods obliterating your view of pretty much anything on either side.

Chris Goodwin talks me through the controls. He tells me the traction control settings are “still quite fruity at the moment, so be careful with the throttle to begin with” and sets the gearchange mode to full manual. A man in front of the car gestures for me to go, so I click the right-hand gear paddle towards me to select first – no clutch as the gearbox is fully automated – and away we rumble. 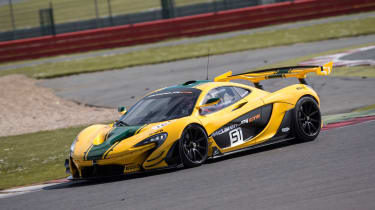 The ride is softer than the F1’s, and the power steering far lighter. Ambling down the pitlane, its exhausts throbbing, the P1 GTR feels like a pussycat compared with the F1. And that’s exactly how McLaren wanted it to feel – friendly, easy to operate, approachable. There’s even air-conditioning to keep you chilled. For the first half-lap I drive it very gingerly indeed, gauging how light and precise the steering feels, how soothing the ride seems, how powerful the brakes are and how little roll there is despite the surprising refinement.

Compared to the F1, the P1’s throttle response also seems strangely soft to begin with. A small amount of pressure on the pedal leads to only a little reaction from the engine, so when the back straight opens out, I press harder in third gear, to see at which point the P1 reveals the other side of its personality – the one that can, if you give it a bit more throttle, thrust you towards the horizon with a severity that might even make you feel slightly ill the first time.

The back straight comes and goes seemingly in a heartbeat, and at the end of it I slam on the brakes far too early – the GTR sheds speed faster than it accrued it. This car is a complete madman in a straight line, no question, but it’s actually the way it stops for and carves its way through the corners that leaves the deepest impression. 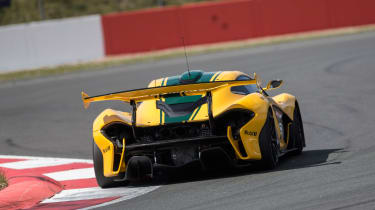 This is what separates the P1 GTR from other supercars: the level of grip it generates mid-corner, the total composure it displays under braking, the balance it has on turn-in and – probably the hardest of all to comprehend – the traction it generates on the way out of corners. In all these areas the GTR is untouchable by all but the very fastest racing cars, yet at the same time it really does feel friendly and even easy to drive.

After another four laps I’m nowhere near as battered physically as I had been in the F1 GTR, but the sense of elation and bewilderment is stronger than it was in the original because, however fast and exhilarating you might imagine the P1 GTR to be, double it, add five hundred, double it again and you still won’t be anywhere near.This car is that special to drive, that exciting – that fast.

The fact that the 20-year-old F1 GTR is, in its own more primal way, every inch as thrilling in spite of – or perhaps because of – its age, is testament to how seriously they commit to the legendary GTR badge at McLaren.

Come on then, if you had a few million quid sloshing around in your bank account, which would you choose, F1 or P1? Tell us in the comments below...