McLaren 675LT ride review: on track in the new 'longtail' 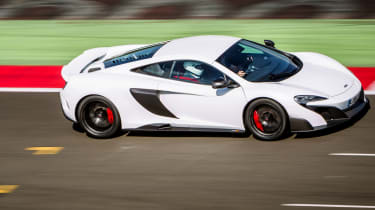 It’s impossible to exactly judge how effective the 675LT upgrades have been without taking the wheel ourselves, but what is undeniable is the 675LT is a more visceral, hardcore car, more singular in focus, even from the passenger seat. We’ll confirm just how much has been gained later this year, but as teasers go this ranks highly. The 500 675LT customers are likely to be pleased with what promises to be a very special edition indeed.

Silverstone, 1997: McLaren raced its new F1 GTR evolution, dubbed ‘longtail’ for obvious reasons, and won. More than just an aerodynamic revision, the car was extensively overhauled to keep it ahead of its competition. Silverstone, present day and Chris Goodwin, McLaren’s Chief Test Driver, is driving us around in the F1 longtail’s spiritual successor, the 675LT.

Based on the 650S, the 675LT is a response to the Ferrari 458 Speciale and customers wanting more focused 650S for track use. Think of the 675LT then as something akin to Porsche’s RS models, a lighter and rawer proposition for the lucky 500 customers with the means to buy and experience it. 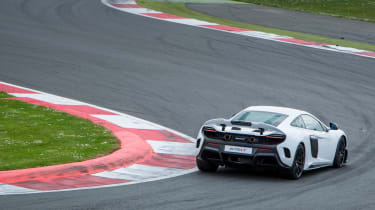 The 675 part of the name refers to the power, in PS, so a beastly 666 in good-old bhp. Torque is up too, with 50 per cent of the engine components revised. There’s a titanium exhaust too, with 30cm longer pipes for aural and performance reasons. The extra length  int he body hasn’t resulted in any weight gain though and indeed every area of the 675LT’s specification has been honed to reduce mass.

Overall the 675LT weighs 100kg less than the 650S at 1230kg. The entire bodywork rear of the doors is unique to the car, and constructed from carbon fibre. A 1mm thinner windscreen and other lighter glass parts contribute a 4.5kg weight reduction alone. McLaren has borrowed seats from the P1, while the LT’s wheels weigh 800g a piece less than those on the P1. If you’re obsessive with weight saving the air conditioning can be dropped off the specification list, shaving around 11kg, though it’s unlikely any will. 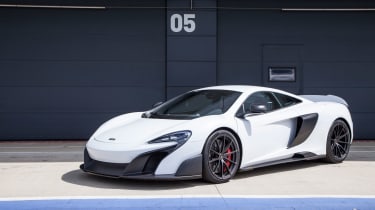 Most examples are likely to be optioned with the Clubsport pack, which adds a fire extinguisher, harness seat belts and a cage behind the seats in titanium - which looks fantastic and weighs about half what it would if it were made of steel.

That all-new rear end features an air brake that’s 50 per cent larger, though the longtail name is a bit of a misnomer, as the length has increased by a scant 34mm, but the overall aerodynamic effect is marked. Combine the new rear end and revised diffuser with a splitter up front that’s 80 per cent larger and the 675LT comes with downforce that’s up by 40 per cent over its 650S relation. 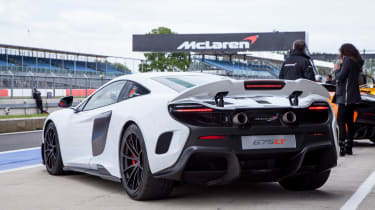 Sat clutched by the lightweight P1 seats, Goodwin thumbs the start button and the 3.8-litre twin-turbo V8 catches and fires before settling into a louder idle. Moving off down the Silverstone pit lane the suspension feels immeidately firmer - the damper rate up 27 per cent at the front and 67 per cent rear, while lighter suspension arms and a 20mm front and rear increase in track boost stability.

Goodwin says that those changes, combined with the faster steering rack, give the 675LT far keener turn in, and certainly it feels more immediate and flatter than the 650S we’ve just jumped out of. It’ll reach 61mph in 2.9 seconds and 124mph just five seconds later, those numbers making even the iconic McLaren F1 look tardy. There’s a greater physicality obvious even from the passenger seat, the forces are higher, be it cornering, braking or accelerative and the sound more intense.

Goodwin says it feels far ‘more alive’ than even the already hugely rapid 650S. It all makes the £259,500 asking price seem sensible, particularly when you take into account the weight savings and limited build status, the 675LT a very fitting tribute to its glorious ancestor.