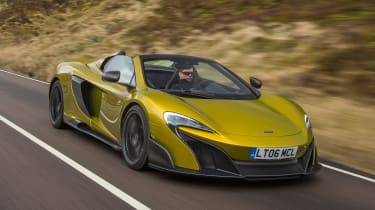 The 675LT Spider is one of the most complete supercars on sale – or it would be, if it hadn’t sold out already. It doesn’t feel any slower or less capable than the standard coupe model, and open-top driving allows you to better appreciate the noise made by McLaren’s twin-turbo V8. As a limited edition, it’s likely to be a shrewd investment financially, but anyone who is buying the 675LT Spider to drive it has made the smartest move of all.

Lately it seems everything McLaren produces is better than the last. The company enjoyed a massive reception for it's 'entry-level' supercar, the 570S, and after that it had an even better result after the 675LT sold out almost as soon as it went on sale.

In fact, we called the 675LT “arguably the most impressive McLaren of them all” when we tested it last year. Now the 675 name returns in open-top form, with the Spider. On the face of it, the 675LT Spider looks reassuringly similar to the hard-top. The engine spec is the same, with McLaren’s 3.8-litre twin-turbocharged V8 delivering 666bhp and 700Nm of torque. And even though the Spider weighs 40kg more than the coupe, it’s still 100kg lighter than the 650S Spider on which it’s based. 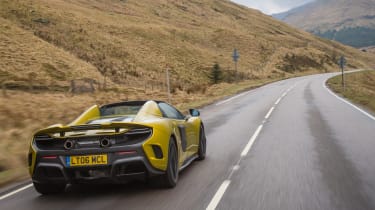 That hasn’t deterred customers, though. All 500 examples sold in just over two weeks, which isn’t bad for a car that wasn’t originally in the product plan. Indeed, the Spider is a triumph for customer power.

The newcomer has around 33 per cent more new components than the 650S Spider, and very mildly tweaked damper settings to set it apart from the hard-top. That’s the theory, anyway. In practice, the result is a car every bit as stunning as its coupe brother. Even on sodden roads around Loch Lomond, it was clear that the Spider has precious few genuine rivals. If the car’s performance or ability to involve have taken a hit thanks to the roof, it’d take a heck of a driver and a demanding race track to really notice it. 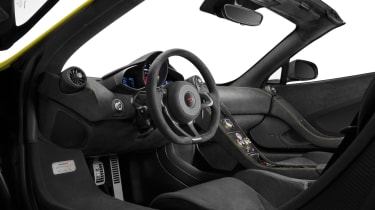 Three key elements stand out. Firstly, the steering is beautifully weighted; it’s slightly meatier than the set-up you’ll find on Ferraris, but still packed with feedback and able to flick the Spider’s nose in a corner with astonishing accuracy.

Then there’s the engine. McLaren actually limited peak torque in a bid to deliver a longer surge, and it really works. This is an astonishingly rapid supercar, yet that wave of torque means it’s as usable when it comes to seizing overtaking opportunities on a motorway as it is fast around a track.

All of this wouldn’t matter a jot if the 675LT’s chassis was too soft or, perhaps more likely, too stiff for road use. But instead, it’s compliant over all but the worst surfaces, and even when you do hit a pothole, there’s only a relatively distant thud. 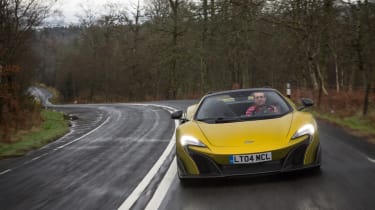 As with the 650S, there are Normal, Sport and Track modes for both the chassis and powertrain. The engine’s behaviour during gearshifts changes with the settings, although unless you’re on a circuit, you can leave the 675LT in Normal mode and then flick between Normal and Sport for the powertrain, depending on your mood. Sport cuts the spark but not fuel flow during shifts, giving you a terrific gunshot crack as unspent petrol is fired up during re-ignition.

Downsides? The carbon-fibre ceramic brakes could have done with a little bit more early bite on the soaking Scottish roads; and, to our ears at least, the 675LT’s engine note is still not the most characterful on the market. However, lowering the rear glass improves things, because you can hear the exhaust note instead of cabin resonance. Dropping the roof altogether is even better; it can operate at up to 25mph.