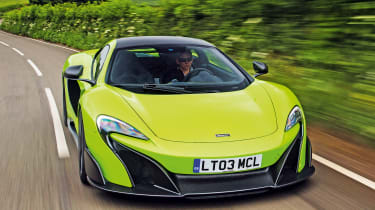 Be in no doubt, the 675LT is a big leap forwards from the 650S – a car that was already right at the top of its class. It’s a textbook example of how removing weight from a car adds ability in every other dimension. And when you mix such a reduction in mass with a series of other well judged improvements to the engine, chassis, steering, brakes and so on, you end up in a very good place indeed. And that’s precisely where the 675LT now sits. For the time being, it is king of the hill.

McLaren Automotive has come a long way in a short space of time, since the first 12Cs were unleashed upon the world in 2011. And of all the cars it has produced over those past four years, this new 675LT is arguably the most impressive of them all.

Why? Because although it may not contain as much technology or be quite as fast as the £1million P1, in reality it’s not that far behind. Yet it costs a quarter of the price of the P1, at ‘just’ £259,500, which might just explain why all 500 examples that McLaren will build over the next two years are now officially sold out. 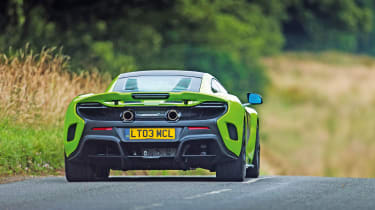 We drove the car around Silverstone and on the roads surrounding Britain’s most famous GP circuit last week, and after half a day at the wheel realised that McLaren isn’t exaggerating when it says the 675 is “closer to the P1 dynamically than it is to the 650S”. And remember, the 650S was itself a huge leap forwards in every dimension compared with the original 12C.

Power from the now familiar-but-modified 3.8-litre twin-turbo V8 rises by 25bhp to 666bhp (or 675PS – hence the first part of the car’s name). The LT tag stands for “long tail”, in homage to the F1 GTR long tails developed for GT racing in the late nineties. 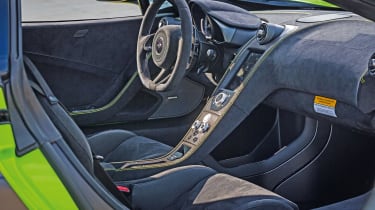 Torque has also gone up to 700Nm, but the biggest upgrade of all is what’s no longer there; thanks to an extensive weight-saving programme, the 675LT is a full 100kg lighter than the 650S.

Mate this with those small but significant increases in power, plus a wider track front and rear, stiffer springs, a 20mm drop in ride height and super-sticky new Pirelli Trofeo tyres, and it becomes a very different animal indeed. 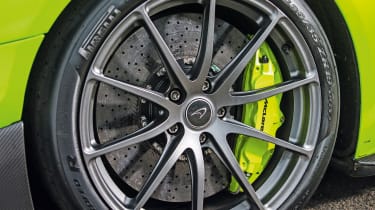 On the road, the 675 retains a surprising degree of civility to its ride and general dynamics, despite its more focused intentions – so long as you select Normal for its electronic chassis set-up. This means it still offers a huge breadth of ability for this kind of car – more so than any rival, including the Ferrari 488 GTB.

Switch to Sport, however, and the stiffer suspension settings instantly make the 675 feel much more alive, but also busier beneath your backside. And if you then engage Sport for the drivetrain programme as well (the chassis and drivetrain have their own separate settings), the gearchange becomes faster and far more physical than before, the exhaust note even more guttural, the throttle response sharper and harder edged. 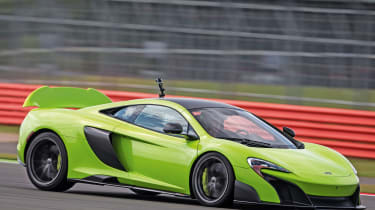 It really does deliver a Jekyll and Hyde kind of transformation. On track, the sharper steering rack and tweaked suspension give the 675 so much more turn-in bite and balance mid-corner compared with the 650S.

And down the straights, it felt a little bit ridiculous to be honest, with never-ending acceleration and even better stopping power, thanks partly to those new Trofeo tyres, whose sidewalls are stiffer and don’t allow so much squirm under heavy braking. And the lap time proved it. In the end, it was less than two seconds slower than the P1 by our casual calculations. 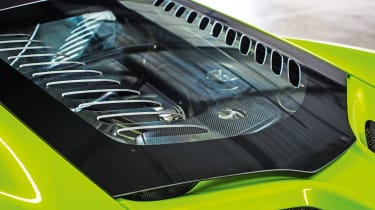 The level of acceleration is now borderline uncomfortable on the public road, no matter which of the various drive programmes you might have selected. There is still some lag from the V8 twin-turbo, but only in the last four of the seven forward gears. In third or below the response is pretty much instant, and when full boost arrives at around 4,300rpm, you really do need to be right on top of your game to deal with it.

The numbers say the 675 can get from 0-62mph in 2.9 seconds and from 0-124mph (200kmh) in just 7.9 seconds; this is a rear-wheel-drive car we are talking about, remember. But if anything, it feels even faster than those bare statistics suggest. 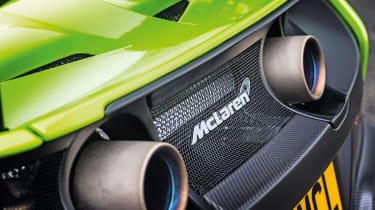 Top speed is 205mph, which is no more than competitive with its key rivals but, says McLaren, “we’re not really concerned about top speed”.

What the company will be concerned about is how the 675 stacks up beside Ferrari’s new 488 GTB, which costs a not insignificant £75,526 less. The answer is: very well indeed in all departments, even if the McLaren feels no faster than the Ferrari in a straight line.