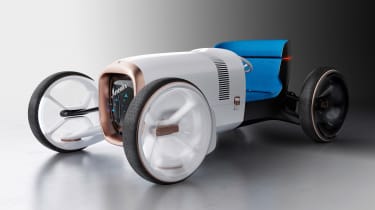 This is the Vision Mercedes Simplex concept. It’s a retro-styled, two-seat design exercise which pays homage to the German brand’s defining veteran vehicle; the 1901 Mercedes 35 PS racer. Its yesteryear styling is peppered with modern technology, which Mercedes says marks the shift towards its latest new design era.

Like the 1901 Mercedes 35 PS, the Vision Simplex features a flat profile, open wheel arches and a low-mounted, lightweight powertrain. The front wheels support a stylised version of the original car’s large mud-guards, while the concept’s rose gold radiator surround harks back to the bronze honeycomb unit fitted to the historic racer.

• Best concept cars of all time

Unlike the original vehicle, which was a body-on-frame construction, the Vision Simplex is built around a monocoque which utilises modern materials such as carbon fibre. The veteran car’s bonnet clasps have also been retained, while the grille beared a bronzed version of Mercedes archaic badge.

The cabin features the same retro-inspired design language, with an upright driving position and a fixed bench seat trimmed in Chesterfield quilting. However, the 35 PS’s analogue instruments have been replaced with a “dynamic digital” gauge which Mercedes claims displays the “right information at the right time,” with data such as speed, navigation instructions and vehicle information only appearing when required. 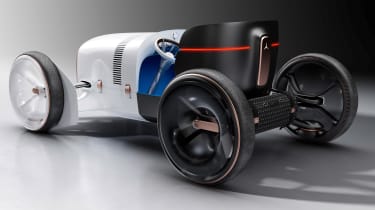 Mercedes claims that the 35 PS was the world’s first “modern car,” which set the template for all future internal combustion-engined vehicles. Most cars at the turn of the 20th century were repurposed stagecoaches, with high centres of gravity and slab-sided styling.

In its day, the 35 PS was a revelation. It featured low-slung, sleek styling, a bespoke chassis and a lightweight 5.9-litre four-cylinder engine with an output of 36bhp. The racing version, with its stripped-back panelling, could reach a top speed of 56mph.

What do you make of the Vision Mercedes Simplex concept? Let us know in the comments section below…