New Mercedes Digital Light tech can project HD images straight onto the road surface, and will be on production models soon 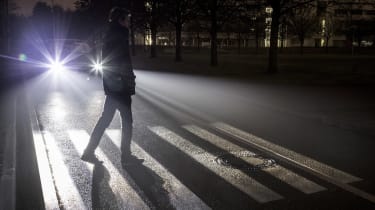 Mercedes has revealed a new prototype headlight system for production models in the near future, which can automatically adapt to other road users and can even project crisp clear images onto the road surface. Called Digital Light, the new setup is similar to the one featured on 2015’s self-driving F015 concept.

The new generation headlights have over one million micromirrors per light, and by using a combination of cameras and radar sensors the brightness value of each ‘pixel’ created by the micromirrors can be altered to suit the environment. 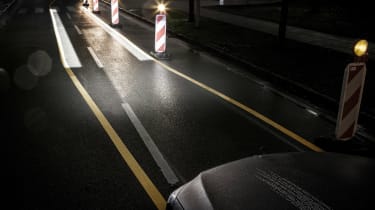 What it means is seamless, real-time alteration in brightness and light direction, so other road users and pedestrians are never dazzled.

“We are not only striving for beam records, rather we want to achieve optimum vision and maximum brightness without glare. Innovative functions for supporting the driver and staging communication with other road users significantly optimise safety when driving at night", emphasises Gunter Fischer, Head of Exterior Body Development and Vehicle Operating Systems at Daimler AG.

However, the most eye-catching aspect of the new Digital Light system is the ability to use the headlights as advanced high-definition projectors. 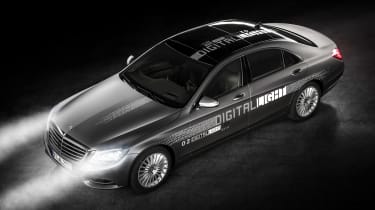 Using the micromirror pixels to create pin sharp images on the road surface, Digital Light will work in tandem with the satellite navigation system to project turn off warnings and directions right onto the street. It’ll mainly be used as a safety feature though.

Get too close to the car in front and the lights project a visual warning on the road. When driving down a narrow street or pathway the lights will illuminate the road surface with two bars representing the car’s width, and stopping for a pedestrian crossing the street produces a zebra crossing, alongside countless other projections for various scenarios.

Do you think a system like Digital Light will make a big difference to driving at night? Let us know in the comments.