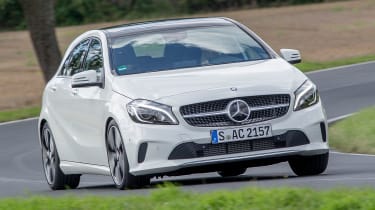 Visual updates for the facelifted Mercedes A-Class are minor, but the bigger news is the option of adaptive damping for the first time – plus the fitment of Dynamic Select variable drive modes across the majority of the range. The variable dampers improve the ride comfort significantly and thus propels the Mercedes among the front-runners in class, although the 2.1-litre turbodiesel remains unrefined compared to competitor units.

This, believe it or not, is the updated Mercedes A-Class. Look for the diamond-pattern front grille, different rear light clusters, re-sculpted bumpers front and rear, and integrated tailpipes in order to spot one, although if it’s a diesel model like this A220 d, there’s an easier giveaway in the form of the boot badging.

The A-Class has been brought into line with the rest of the Mercedes range nomenclature, meaning the diesels are no longer CDIs but instead bear the ‘d’ suffix. As the Mercedes has always been a handsome car, the mild alterations do little to spoil its kerb appeal. 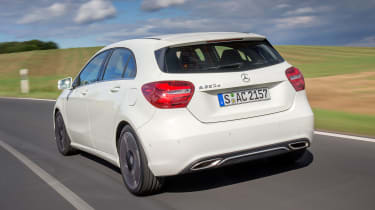 The Mercedes’ interior also looks little different from the pre-facelift cabin, although it’s fine in terms of fit and finish – that awkward freestanding display screen in the centre of the dash aside. Mercedes claims £1,100 of additional equipment for list price increases of a mere £350, so even entry-spec SE cars get Media Interface, 16-inch alloys, a reversing camera, Artico upholstery and other items to make them feel premium. Spend another £995 and Sport trim adds 17-inch wheels, Dynamic Select, a larger eight-inch display and climate control, while AMG Line cars (£1,295 on Sport) upgrade the alloys to 18s and bring in AMG bodystyling with lowered suspension.

However, for £595, two-mode selective damping can be fitted on AMG Line, limited Motorsport Edition and A250 AMG models. This lets you choose between Comfort and Sport modes, although as it is properly adaptive, the system can vary the settings on the fly according to how the car is being driven at the time. And it’s this that makes the A-Class a more appealing vehicle than it was before.

In Comfort mode, the A220 d makes a much better job of soaking up road imperfections before they reach the car’s occupants. There’s still an underlying feeling of slightly firm secondary ride characteristics, but overall the Mercedes is more comfortable on particularly craggy roads than it has ever been before. The seats are comfier too and aside from wind noise emanating from the A-pillars at speed, the A220 d is a superb motorway cruiser. 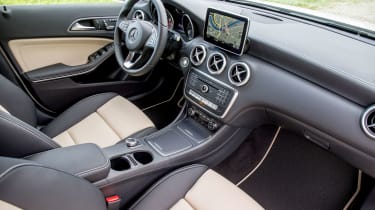 It’s a shame the 2.1-litre turbodiesel hasn’t been subjected to some updates though, as it remains a louder, coarser unit than rival 2.0-litre engines from Audi and BMW. It’s muscular enough, helped by the facelifted car gaining an extra 7bhp to stand at a maximum of 175bhp delivered between 3,600- and 3,800rpm. But if you decide to rev it out to 4,000rpm, it becomes extremely vocal and strained in its delivery. We also saw just 42.8mpg from the A220 d during a relatively unstressed drive, so we’d hope that as the engine frees up the Mercedes might get closer to the brochure numbers.

Running costs should be impressive, though, as even the automatic-only A220 d sits in Band B for VED, amounting to £20 a year. Its Benefit-in-Kind rate is just 19 per cent, but avoid specifying £1,500 4Matic all-wheel drive unless you really need it as that moves CO2 emissions up to 124g/km (Band D, £110 per annum) and drops quoted economy to 58.9mpg. 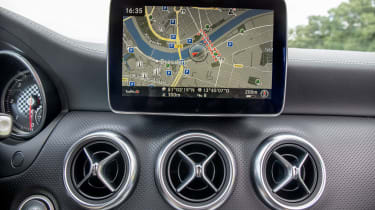 There’s no doubt the A-Class has been improved by the mid-life facelift and it’s now up there with the Audi A3 challenging for class honours. At more than £28,000 in the UK, the A220 d isn’t a cheap car but it does feel like a high quality product in most departments – the noisy 2.1-litre diesel aside.

We’d definitely recommend opting for the selective damping (if you go for one of the top-spec cars) as it provides superb ride quality for the baby Mercedes.